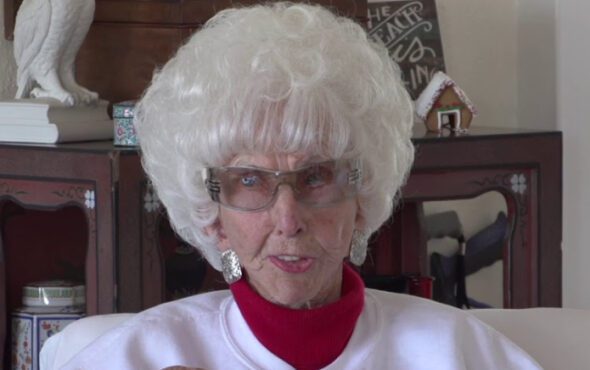 A League of Their Own inspiration and baseball icon Maybelle Blair has publicly come out as gay at 95.

Between 1943 and 1954, baseball fans immersed themselves in the All-American Girls Professional Baseball League (AAGBL).

At the time, male players attached to Major League Baseball were away at war – which prompted the creation of the aforementioned women’s organisation.

Since its closure in 1954, the AAGBL has continued to make a massive impact within the sports and entertainment industries.

The legendary sports era and its players even inspired the creation of the beloved film A League Of Their Own and the forthcoming TV series of the same name.

The show, which is set to premiere on 12 August via Prime Video, will also centre on the players of the AAGBL.

However unlike the 1992 film, the series is set to feature two queer players, Carson Shaw (Abbi Jacobson) and Greta (D’Arcy Carden), and their blossoming romantic relationship.

A post shared by A League of Their Own (@leagueonprime)

During the show’s recent Tribeca Film Festival panel, former AAGBL player Maybelle Blair – aka All The Way Mae – praised the increase of LGBTQ+ representation before publicly coming out in a heartfelt speech.

“I think it’s a great opportunity for these young girl ball players to come [to] realise that they’re not alone, and you don’t have to hide,” she told the crowd. “I hid for 75, 85 years, and this is actually basically the first time I’ve ever come out.”

Blair went on to say that at the time, she felt like she was the “only [queer] person in the world” before opening up about her first relationship with a girl.

“I thought, oh my gosh, Maybelle, what’s wrong with you? Because I had a crush on this girl in high school and finally, we sort of had a little thing you know how you do,” she said.

“It was really bad because in our day you wouldn’t dare tell your family or hint to anybody that you were gay [it] was the most terrible thing in the world.”

At the end of her speech, Blair described her time with the Peoria Redwings as “amazing” due to her LGBTQ+ friendly teammates.

“I went back to Chicago, and I got on the team, and I’ll tell ya it was the most amazing time of my life because they asked me to go out to a bar,” she explained. “Well, it turned out to be a gay bar, and I was never so happy in my life.”

Tune in to her heartwarming statement below.

95 year old maybelle blair, a former player of AAGBPL, came out publicly yesterday at the league of their own premiere 😭😭 here’s her talking about being gay in the 1940s pic.twitter.com/4uLjjr6rF9