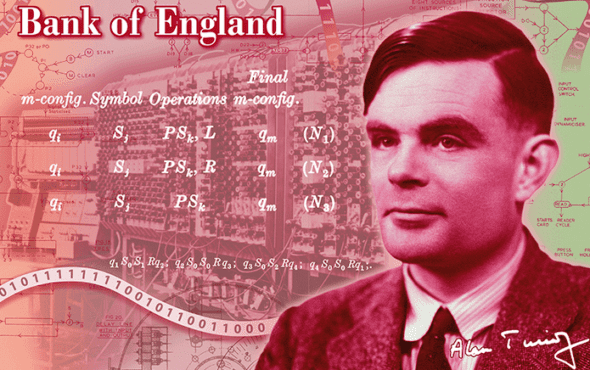 The Bank of England’s newly-designed £50 note with the portrait of Alan Turing has entered circulation.

The release date of the new note coincides with what would have been his birthday.

The mathematician, computer scientist and theoretical biologist was best known for helping accelerate Allied efforts to read German Naval messages enciphered with the Enigma machine, which brought World War II to an end years earlier than expected and saved countless lives in the process.

Turing was also celebrated for his development of early computers, first at the National Physical Laboratory, where he designed the Automatic Computing Engine (ACE) – one of the first designs for a stored-program computer – and later at the University of Manchester, where he helped develop the innovate Manchester computers.

Due to his sexuality, however, Turing was chemically castrated (as an alternative to prison) and barred from working for UK intelligence agency GCHQ.

He was eventually driven to suicide, passing away in 1954 (16 days before his 42nd birthday) as a result of cyanide poisoning.

Following the advancement of LGBTQ+ rights, Turing has gained his rightful place in history and had his accomplishments widely recognised. A law pardoning thousands of queer men who were convicted under now-abolished anti-LGBTQ+ offences was named in his honour, and Turing himself was pardoned in 2013.

The new note boasts advanced security features with two windows and a two-colour foil – partly based on photos of the wartime codebreaking centre at Bletchley Park – making it incredibly difficult to counterfeit.

It joins the Sir Winston Churchill £5, Jane Austen £10 and JMW £20, meaning all Bank of England notes are now available in polymer.

GCHQ also unveiled artwork of Turing’s portrait inside the wheels of the codebreaking British Bombe machine to celebrate his enduring legacy.

“Our banknotes celebrate some of our country’s most important historical figures. That’s why I am delighted that Alan Turing features on the new polymer £50 note,” Bank of England Governor Andrew Bailey said at Bletchley Park.

“Having undertaken remarkable codebreaking work here at Bletchley Park during the Second World War, he went on to pioneer work on early computers, as well as making some groundbreaking discoveries in the field of developmental biology. He was also gay and was treated appallingly as a result.

“Placing him on this new banknote is a recognition of his contributions to our society, and a celebration of his remarkable life.”

Sir Jeremy Fleming, GCHQ director, said: “Alan Turing was a genius who helped to shorten the war and influence the technology that still shapes our lives today. He was embraced for his brilliance but persecuted for being gay.

“Turing’s legacy reminds us every day that diversity is essential and inclusion is mission critical to our organisation. Turing was and remains a beacon of hope for all who dare to live and think differently.”