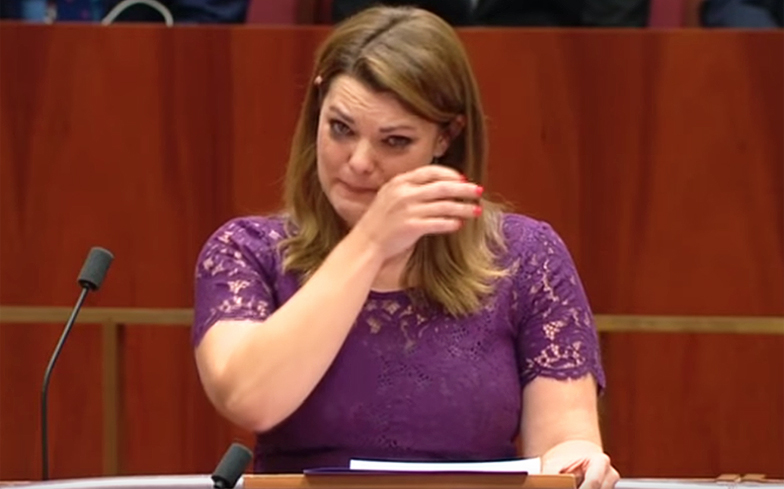 Greens Senator Sarah Hanson-Young broke down during a debate over marriage equality.

Earlier this month, it was announced to much celebration that 61.6% of Australians had voted in favour of legalising same-sex marriage in a voluntary, month-long postal survey on the issue.

But that vote was non-binding, and merely provided a guideline for politicians to get an idea of what their public wants before they themselves decide whether or not to pass a bill to make marriage equality a reality.

During a debate in parliament this week, Hanson-Young struggled to hold back her tears as she issued a heartfelt apology to her former party leader Bob Brown, an LGBT+ activist, that same-sex marriage wasn’t passed before he retired.

“[Bob was] a man who has always stood for the rights and equal treatment of others, and stood proudly in both the Tasmanian parliament and the Australian parliament as a gay man,” she said.

“When Bob retired in 2012, I said to him, ‘Bob I’m really sorry that we haven’t been able to reverse that awful law before your time was up’. So today I stand here with my Greens colleagues finishing the job that Bob Brown started.”

She also recalled growing up in a close-minded country town and attending a small highschool, where her best friend was gay and “struggled for a long time” with people not accepting him or his sexuality.

“I remember thinking I never did quite enough to have his back,” she said.

“The yes vote that occurred two weeks ago is so important for sending a message to these young people, right around the country, that it’s not good enough that you’re just treated differently.

“The resounding yes vote across the country is a symbol to every young person in this country that it doesn’t matter who you are, who you have a crush on, who you fall in love with – the nation has your back.”

She added: “You are equal, and you are loved.”

Watch her emotional speech below.