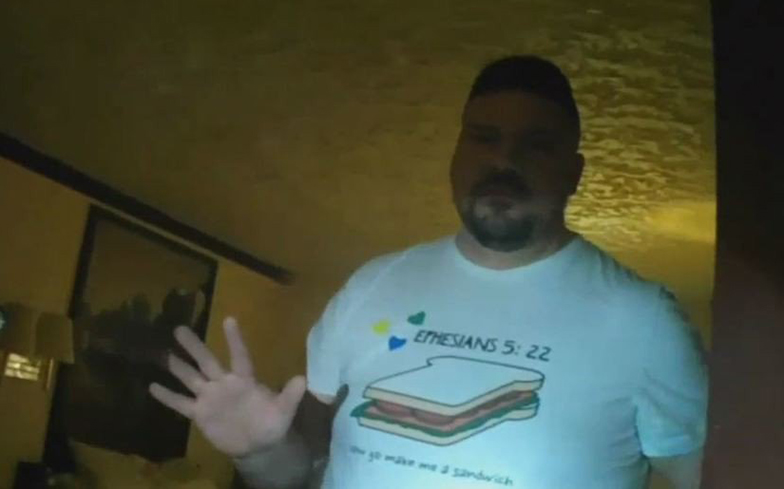 Footage of a Republican senator caught in a motel room with a teen boy has been released.

Body cam footage released today by police shows the married father-of-four being caught red-handed in a motel room with a 17-year-old boy, who authorities say had been hired as a prostitute.

The age of consent in Oklahoma is 16, but the state’s prostitution laws apply to people under 18.

“You have a juvenile in your motel room,” an officer says in the video. “Come out before you get me worried, show me your hands.”

When Shortey accuses the officer of freaking him out, he replies: “Yeah, that’s what we do. He’s 17.”

In the footage, Shortey can be seen wearing a t-shirt referencing a Bible verse (Ephesians 5:22) about women obeying their husbands, alongside the phrase, ‘Go make me a sandwich’.

The disgraced former senator claims in the video that he was the teen’s mentor, and that they were just talking.

“He couldn’t graduate high school and [I was] trying to help him get his life on track,” he says.

Officers reported a strong smell of marijuana in the room, which Shortey initially said belonged to the teenager, and found a small amount of the drug alongside condoms and lotion in a backpack.

Police also analysed the teen’s tablet computer, and found messages from Shortey referring to him as “baby boy” and offering him cash in exchange for “sexual stuff”.

The former senator was elected on a ‘family values’ platform and consistently voted in favour of bills that would have a negative impact on LGBTQ people.

One of these was a bill which would make it legal for businesses to discriminate against LGBTQ people.

Last Thursday, Shortey pleaded guilty to the child prostitution charges in exchange for federal prosecutors dropping three child pornography charges against him, according to the New York Post.

Shortey is currently awaiting sentencing, and could face life imprisonment and a fine of up to $250,000.