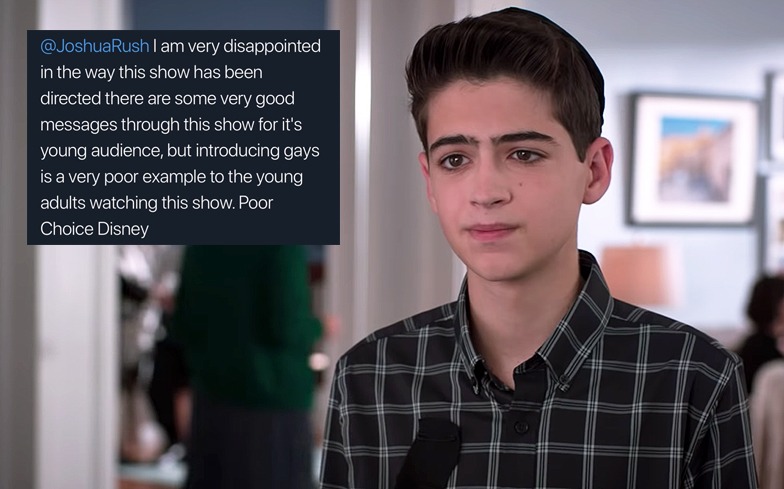 Andi Mack star Joshua Rush had the perfect response to a homophobic troll.

The 17-year-old actor made history earlier this year when his character Cyrus Goodman, from popular kids show Andi Mack, became the first ever Disney character to say the words: “I’m gay.”

Before this, the character came out to his friend Buffy by admitting that he has a crush on Jonah, but he had never actually explicitly said he was gay, so it was undeniably a landmark moment for queer representation on kids TV.

Related: Gus Kenworthy had the best response to a homophobic Twitter troll

But not everyone appreciated the moment, as one Twitter user accused Disney and actor Joshua of setting a “very poor example” by having the character be openly gay.

“I am very disappointed in the way this show has been directed there are some very good messages through this show for it’s young audience, but introducing gays is a very poor example to the young adults watching this show,” they wrote.

Joshua responded in a polite manner, choosing to educate them about the importance of love and acceptance rather than hit out.

“I’m sorry you feel that way. Here’s the thing though: gay kids are gonna exist no matter whether you like it or not. And we need to support and love all kids in every way we can,” he wrote.

“So when someone realizes they are gay, I want them to identify with something so they’re not alone.”

He later added: “It’s fine to have your opinion but we’re just trying to explain how an opinion like that – one that supports LGBTQ+ kids not having a voice – can be really damaging.”

The bigoted Twitter user in question has since deleted their tweet, but Joshua shared a screenshot of it and issued a reminder that “the internet is forever”.

Now, that’s how you put a homophobe in their place.