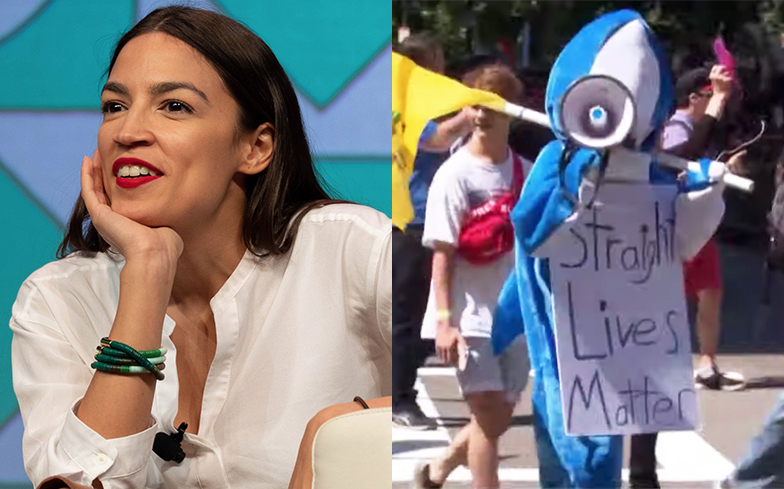 Alexandria Ocasio-Cortez is not here for your ‘Straight Pride’.

The American politician and activist has a long history of supporting LGBTQ rights and delivering truths, so of course she had the best response to the embarrassing ‘Straight Pride’ parade that took place in Boston on Saturday (31 August).

The controversial parade, which drew around 200 supporters and over a thousand counter-protesters, was organised by Super Happy Fun America – a group with links to far-right organisations who believe straight people are “an oppressed majority”.

Some people who took part in the march held signs reading ’Straight Lives Matter’ and ‘Make Normalcy Normal Again’, while others used the opportunity to show their support for US President Donald Trump.

Describing the event as a “white supremacist parade”, Alexandria wrote: “For men who are allegedly so ‘proud’ of being straight, they seem to show real incompetence at attracting women to their event.

“Seems more like a ‘I-Struggle-With-Masculinity’ parade to me. Hope they grow enough over the next year to support / join LGBTQ fam next Pride!”

Back when it was first announced in June, the politician questioned what the dress code for such an event would be, joking that people would have to wear “socks with sandals” and “dad jeans” if they wanted to march.

“Will ‘Straight Pride’ be a Freaky Friday type situation where all of our history books, movies, stories, media, news, etc feature mostly LGBTQ+ people & perspectives? Will people have to come out as straight?” she wrote.

We’ve rounded up some of the best reactions to ‘Straight Pride’ here.