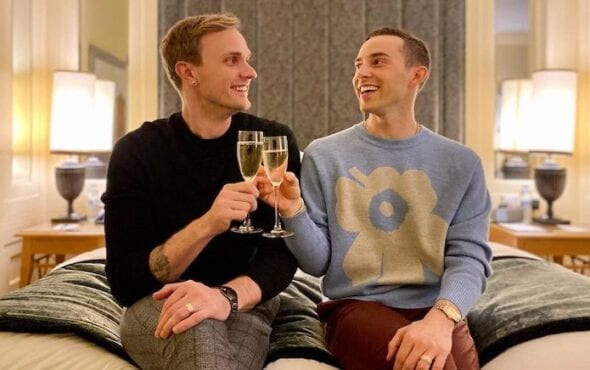 Rippon, who is the first openly gay man to represent the USA in the Winter Olympics, posted the news yesterday (10 February).

Rippon and Kajaala proposed to each other while they were staying in Finland this winter.

The gold medallist wrote: “JP and I didn’t get to see each other for almost all of 2020 because of the pandemic. When there was finally a chance for me to go and see him in Finland, I jumped at it.

“I was there for a little over two months. While I was there, I would tell him about five million jokes that I would want to pitch during my 5 hour zoom meetings for our NBC comedy.

“And he would drive me into the Finnish forest where I would attempt to try and “help” him shovel snow so he could keep working on the cottage he’s building.

“So, in between all that and binging the entire 4 seasons of The Crown, we bought ourselves some rings and said that magic word.. “duh!” We got engaged”.

Rippon and Kajaala both met in 2018 on the dating app Tinder.

Jussi-Pekka Kajaala also shared a heart-warming image of himself and Rippon celebrating on social media. The caption read: “No woman no cry”.

Rippon’s mom, Kelly Rippon, replied with a sweet comment which read: “Changing my bio to ‘mom of seven’ love you JP”.

JP & I didn’t get to see each other for most of 2020. When there was a chance for me to go to Finland, I went and stayed for a little over 2 months. In between binging the entire 4 seasons of The Crown, we got rings and said that magic word.. “duh!” ~* We got engaged*~ 🥂❤️ pic.twitter.com/vriXpHT5MS