Activists warn that US Supreme Court “will not stop” at overturning Roe v. Wade 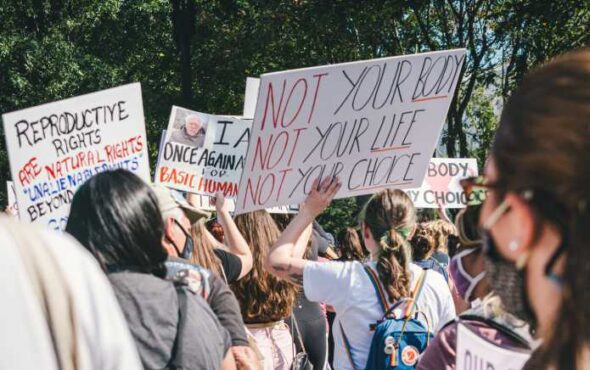 A leaked draft opinion has indicated that the Supreme Court has voted to overturn Roe v. Wade, something which could have harmful ramifications for LGBTQ+ people.

However, the court appears to be poised to overturn the decision, according to a leaked draft opinion obtained by Politico on 2 May.

The Supreme Court has voted to strike down Roe v. Wade, according to an initial draft majority opinion written by Justice Samuel Alito and obtained by POLITICO.

“We hold that Roe and Casey must be overruled,” Alito writes. https://t.co/nl3JFLx9xg

The decision, which is not expected to be finalised for another month or so, would mean that abortion rights would be determined by individual states.

It marks the first time in modern history that a draft decision has been disclosed publicly while a case was still pending, Politico reported.

Republican-appointed justices Clarence Thomas, Neil Gorsuch, Brett Kavanaugh and Amy Coney Barrett reportedly voted with Alito, according to a source who spoke to the aforementioned outlet.

“If the Court does overturn Roe, it will fall on our nation’s elected officials at all levels of government to protect a woman’s right to choose,” said President Joe Biden. “And it will fall on voters to elect pro-choice officials this November.”

Some politicians and activists have warned of what the rollback of a 49-year-old precedent could mean for other rulings, such as Obergefell v. Hodges which guaranteed the fundamental right to marry for same-sex couples.

Jon Cooper, the former National Finance Chair of Draft Biden 2016, added that the “far-right Supreme Court majority is coming after GAY MARRIAGE next.”

Congresswoman Ilhan Omar called for the Supreme Court to be expanded, a move that would give Democrats the opportunity to combat its current conservative majority.

“Overturning Roe would put the lives of women across the country at risk,” she stated. “It would fly in the face of decades of precedent and the overwhelming majority of public opinion. And they will not stop here.”

The draft in question was not completed until 10 February and the ruling is not final until it is officially published, with justices able to change their position before then.