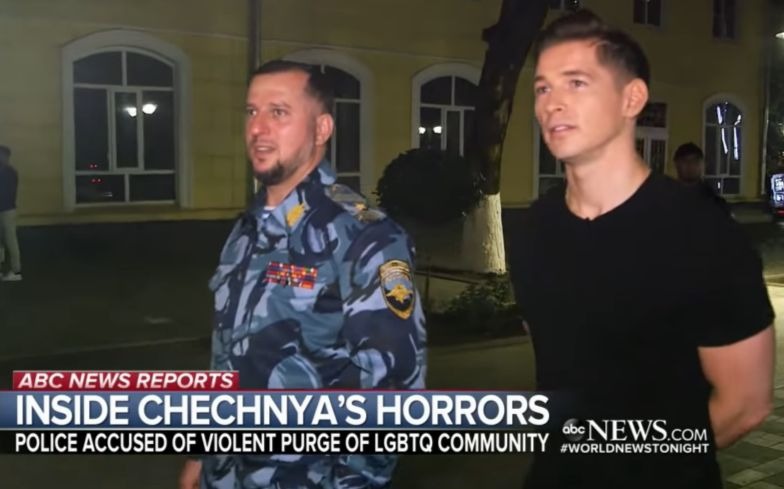 A purge against the LGBTQ community has been happening in Chechnya since 2017.

At the start of the year, two more people were reported to have been killed and a further 40 have been detained.

Much like the first wave of persecution back in 2017, police threatened the victims’ families with violence if they spoken out about the crackdown. Authorities have also reportedly taken documents from the prisoners so they cannot escape the region while being held at a jail in the town of Argun.

Investigating the reports, ABC reporter James Longman, traveled to the semi-autonomous region for ABC’s Nightline. He spoke to a victim, Amin Dzhabrailov, who had been detained by authorities before he escaped to Canada, and the Chechen police chief, Apti Alaudinov.

Explaining what happened to him, Amin told James that he was “yanked” from his hair salon, before being thrown in prison where he was “beaten and electrocuted over 14 days.”

The police chief, Alaudinov denied all allegations that the police were rounding up LGBTQ people, saying: “Ask any Chechen, do you have any gays in your family?

“He will punch you. Why? Because to him it is an insult.”

Other not saying the atrocities were being carried out, Alaudinov also defended his force, claiming that police officers around the world commit come crimes.

In one of the prison, James told Alaudinov that he was gay. His revelation initially took the police chief aback before he said: “It’s your life and you should live however you want. But at the same time, don’t teach us how we have to live. That’s all!”

You can watch James’s report below, or by following this link.

In a write-up for the report, James Longman wrote: “I think for Alaudinov, it really didn’t matter to him that I was gay. In fact, I think that perhaps it reaffirmed his own values to him: that Chechnya has a superior culture, and that the West has allowed homosexuality to weaken ours.

“I told him my sexuality because perhaps on some level I thought that I could shift something in his mind and challenge his perceptions about gay people.”

He finished, by asking Alaudinov if he thought he was any less of a man for being gay, to which Alaudinov responded by saying: “I will tell you honestly, I wouldn’t like you to be my friend.”