A truly inclusive Pride must include businesses too 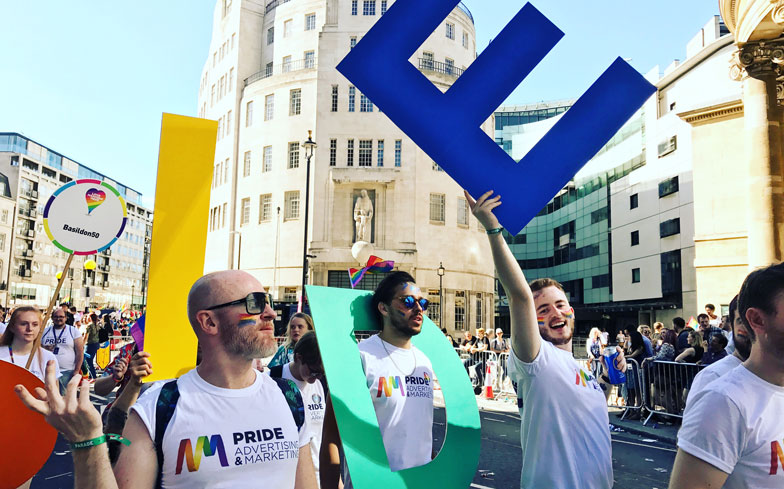 Image courtesy of Pride AM

At last year’s Pride in London, I was one float along from Disney. This meant that I marched to the sound of Let It Go on loop… for three hours in thirty degree heat. And even though I left with my ears bleeding, fantasising about
performing a lobotomy on Princess Elsa with an icicle, I’m proud I spent the day shoulder to shoulder with the corporate section of Pride, as part of the advertising and marketing LGBTQ organisation PrideAM.

Shortly afterwards, The Guardian ran an opinion piece from Peter Tatchell who wrote that “corporate floats, and onerous rules have ripped out the heart of a once political march with a party atmosphere.” Then, a few months later, I sat on a LGBTQ business panel alongside Pride in London organisers where I heard ‘the business world’ (whatever that is) blamed time and time again for everything from making the whole day less fun in general, to cynically and deliberately stealing the space of the diverse voices within our community that should have been given a bigger platform.

I’m not denying we need to hold a critical magnifying glass up to Pride. When much of what you see at Pride is a sea of white abs trying to get their perfect #pride #instagay post to follow on from their earlier #avocado #brunch via Instastory, we have a problem. It’s clear we need more diverse voices and to double down on the political purpose of the day, especially if that means thinking about the LGBTQ world beyond our borders. I also agree with Peter Tatchell on the need to protect the fun and the party atmosphere to not let Pride get too sanitised and boring. But what doesn’t make sense to me is the suggestion that including businesses is somehow at odds with the true meaning of Pride.

Related: Rabbi, buttmitzvah and tradition: A coming of age for queer Jews

The first thing that we have to remember is that businesses don’t march at Pride — employees do. Businesses are not inanimate objects. Businesses, especially given the high proportion of service industries in the UK’s economy, are people and they win or lose as a result of how talented and motivated these people are — more so than as a result of factories or any other fixed assets. Employees who march at Pride under their company’s banner are not carrying out a PR exercise on the whipping orders of an evil and cynical marketing director — they are generally a group of people who are celebrating the fact that today they can be who they are at work and don’t have to hide their identity when they put on a suit or a uniform. And they should be allowed to celebrate this, but it hasn’t always been that way.

We have short memories. It was only in 2003 that it became illegal for employers to discriminate on grounds of sexual orientation, and only in 2010 that the Equalities Act offered protection from direct and indirect discrimination, victimisation and harassment to LGBTQ employees. Our very recent history as a community is a history of talented people that have had to spend the majority of their life, five out of seven days, pretending to be someone else to get by, or get ahead. Them biting their tongue in the face of bullying, or being denied access to a career all together, let alone flourishing.

We still need to encourage more businesses to empower their employees to march because working culture in our businesses still has a long way to go. The world of work still isn’t open to everyone in our community, especially the trans community, where unemployment remains far higher than the national average. Only 51% of LGBTQ people are out at work and that drops to just 36% of young people. That’s not surprising when the latest TUC data shows one in three LGBTQ people are harassed or bullied at work. If you’re not yourself at work it’s a lot harder to succeed. Tragically, for nearly half our community, work is somewhere to hide away, rather than flourish and become a leading voice. Image courtesy of Pride AM

To my mind, saying that businesses have no place at Pride blindly denies the impact, positive and negative, of working life culture on our community – historically and today. It’s all too easy for a twenty-something millennial to throw shade on the businesses marching at the back. It’s hard to see, from the comfort of their cushty, London, liberal, media-sector career, that for many people, walking out and proud with their colleagues, under the banner of the company they have dedicated their career to is a big moment of pride they have waited a long time for.

And while I hope the student crowd at Pride are having too much fun to be thinking very seriously about their future beyond getting into Heaven before the Jägerbomb deal is over, the businesses that march are a powerful showcase to them of careers they might not think they could go into. Take the police force, or the Armed Forces, or banks – because they are often perceived as straight, macho, organisations the talent in our community often self-select out of them, thinking someone like them won’t fit in. In that context, two policemen kissing at Pride, becomes more than just a widely shared Buzzfeed video – it’s a moment where a young person is shown that someone like them could be welcome there.

We all want Pride to be political so we can change culture, but that means we need to bring businesses in more, not less. We may not like to admit it but politicians pander to businesses much more than businesses pander to politics. Businesses and more specifically brands do have the power to lead culture and social change, for good and for bad. In the UK we watch on average over three and a half hours of TV every day, including 43 adverts. Our cities are wallpapered with billboards and we start and finish every day through the lens of our phones where we consume more and more content than ever before. Like it or not, brands and content creators shape the image we and future generations have of the world, of society and of culture.

There will always be brands who try and leverage a LGBTQ narrative to their own ends without embracing the values of our community – but they get found out – and we will always hold them to account. L’Oréal, for example, was not allowed to get away with trying to use Munroe Bergdorf as the face of diversity without giving her a voice. And I agree that many of the brands that are starting to represent us are not representing all of us, but I believe that means we need to engage them more, not less, to get what we want.

If we want to be properly represented in culture, we must bring more brands and businesses, like Disney, and all the others who want to join us, into Pride. Even if that means more Princess Elsa. We should not start accusing all those that want to get behind Pride of ‘jumping on a bandwagon.’ If being LGBTQ makes me a bandwagon then I openly invite every business to jump on and ride me, hard.