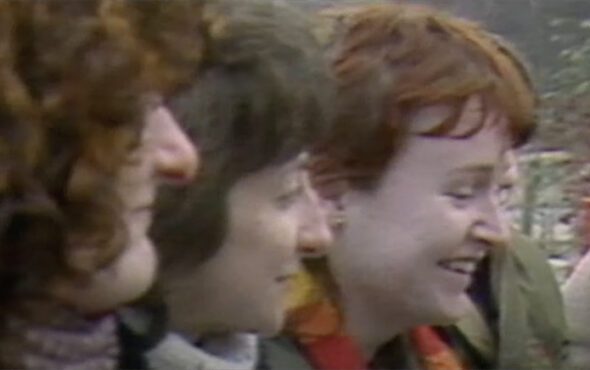 In its early 1980s heyday, Greenham Common Women’s Peace Camp became an emblem of the global anti-nuclear movement, making headlines in Britain and beyond.

Today, some of the women who went to protest against the stationing of U.S. missiles at an airbase in southern England say the camp also helped them find the courage to come out as lesbians.

“For me it was a time of coming out, a time of finding myself, a time of safety,” Chris Drake, who lived in the camp for eight years, said before Monday’s release of “Mothers of the Revolution”, a documentary about Greenham Common.

The documentary, directed by Briar March, was released to rent on YouTube, Sky and Apple TV and to watch with a Virgin TV subscription in Britain on Oct. 18.

Greenham Common’s protests began in August 1981, when a few dozen women, plus a handful of men and children, walked more than 100 miles (160 km) from Wales and chained themselves to the fences at the base.

While most of the women had to return home, some stayed and set up a camp, which soon became women-only. Until it was dismantled in 2000, after the old fences were finally removed, its population fluctuated from fewer than 20 to hundreds.

But although few women lived at the camp, thousands protested for shorter periods of time and the movement inspired similar protests around the world.

Actress and politician Glenda Jackson, who narrated the new documentary, describes them in the film as “ordinary women who helped end the Cold War”.

Another protester, Rebecca Johnson, recounts how Mikhail Gorbachev, the last Soviet leader, told her through a translator in 2004 that the Greenham women had helped make possible a 1987 nuclear disarmament treaty with the United States.

‘YOU COULD BE YOURSELF’

Johnson first visited Greenham in early 1982 when she was 27, having recently returned from two years teaching in Japan and helping a group of lesbian feminists set up Tokyo’s first rape crisis centre.

Johnson, who had nightmares about the nuclear bombing of Hiroshima, moved there full-time in August 1982, only leaving in 1987 when the United States and the Soviet Union signed a treaty that meant the missiles would be removed between 1989 and 1991.

Asked how it was living only with other women, she laughed. “Well I loved it. I’m a lesbian, why wouldn’t I?”

Johnson, now 67, who grew up in a religious family, had previously defined herself as bisexual, but said the media’s vilification of the Greenham women as lesbians pushed her to embrace her identity.

“Almost all of us who were there were assumed to be (lesbian) and we were attacked as if we were. And in a strange kind of way that gave me courage finally to come out more clearly to my own family.”

Many of the women were arrested repeatedly for offences such as obstructing highways, when they blocked military vehicles carrying the nuclear missiles, and criminal damage for daubing missile launchers with a mixture of paint and porridge.

Johnson estimated she spent about 12 stints of 14 to 30 days in prison over several years. Drake said she went to prison for between two weeks and two months “five or six times”.

Nonetheless, both Johnson and Drake, who is now 74, continue to protest for various causes and said they were thankful for their time at Greenham.

“Talk to any woman at Greenham and they will recognise that whether you were lesbian, bisexual, heterosexual, Greenham was a place where you could actually be yourself and explore aspects of yourself that maybe you’d suppressed,” Johnson said.