A new ‘lesbian, gay and bisexual alliance’ group is facing backlash for being anti-trans 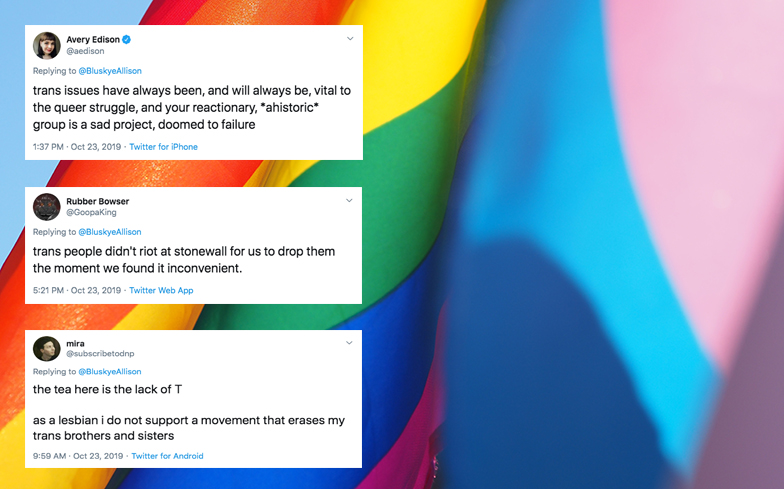 A new ‘LGB Alliance’ group is facing backlash for being anti-trans.

The group say they held their first meeting on Tuesday (22 October) night, and claim to “assert the rights of lesbians, bisexuals and gay men to define themselves as same-sex attracted” while excluding trans individuals.

“This is an historic moment for the Lesbian, Gay and Bisexual movement. LGB Alliance launched in London tonight, and we mean business,” wrote Allison Bailey, a criminal defence barrister at Garden Court Chambers.

“Spread the word, gender extremism is about to meet its match.”

Unsurprisingly, the announcement of the group’s existence has faced plenty of backlash from the very people it claims to be representing – lesbian, gay and bisexual people – who have taken to social media to distance themselves from the ‘alliance’.

“Nice to know that despite trans and non-binary people doing all the heavy lifting for the movement for decades y’all gonna jus try and drop us as soon as it becomes politically inconvenient,” wrote one Twitter user.

Another added: “Says everything about you that your primary focus is not to promote the rights of LGB people, but to diminish those of trans people. Undeniably grim.”

A third said: “Not in my name you don’t. Also, the 1980s called and they want their moral panic back.”

See some of the many, many replies calling out the ‘LGB alliance’ below.

It goes without saying that we do not support any group that excludes trans and non-binary individuals.