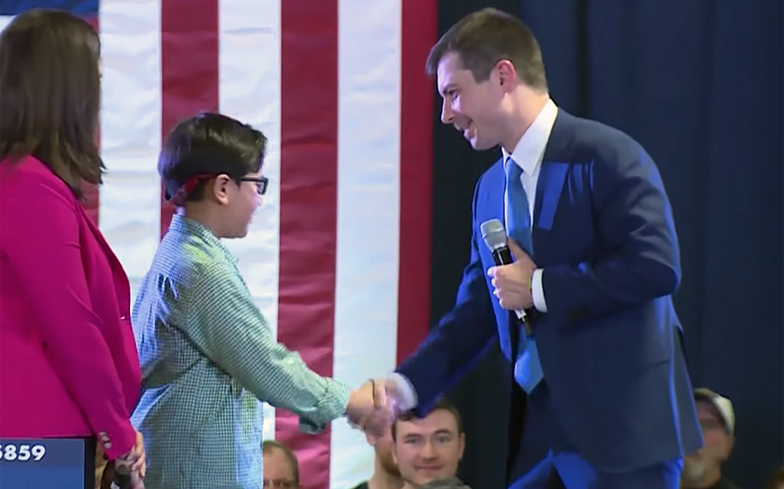 “You seem pretty strong to me.”

At a rally in Denver, Colarado on Saturday night, openly gay presidential hopeful Pete Buttigieg shared an emotional moment with a young supporter who wanted advice on coming out.

“Thank you for being so brave,” 9-year-old Zachary Ro asked in a question selected via fishbowl. “Would you help me tell the world I’m gay, too? I want to be brave like you.”

Zachary, who attended the rally with his parents, was then invited to join Pete on stage. He presented the former mayor of South Bend, Indiana with a bracelet, which he put on his wrist.

“I don’t think you need a lot of advice from me on bravery. You seem pretty strong to me,” Pete said in response to Zachary’s question.

“It took me a long time to figure out how to tell even my best friend that I was gay, let alone to go out there and tell the world, and to see you willing to come to terms with who you are in a room full of thousands of people you’ve never met, that’s really something.

“Let me tell you a couple of things that might be useful. It won’t always be easy, but that’s okay, because you know who you are – and that’s really important, because when you know who you are you have a centre of gravity that can hold you together when all kind of chaos is happening around you.

“The second thing I want you to know, is that you’ll never know who’s taking their lead from you, who’s watching you and deciding that they can be a little braver because you have been brave.

“When I was trying to figure out who I was, I was afraid that who I was might mean I could never make a difference, and what wound up happening instead is that it’s a huge part of the difference I get to make.

“You’ll never know who’s life you might be affecting right now just by standing here. There’s a lot of power in that.”

The two were then joined on stage by Pete’s husband Chasten, who told Zachary “we’re so proud of you” before walking him back to his parents.