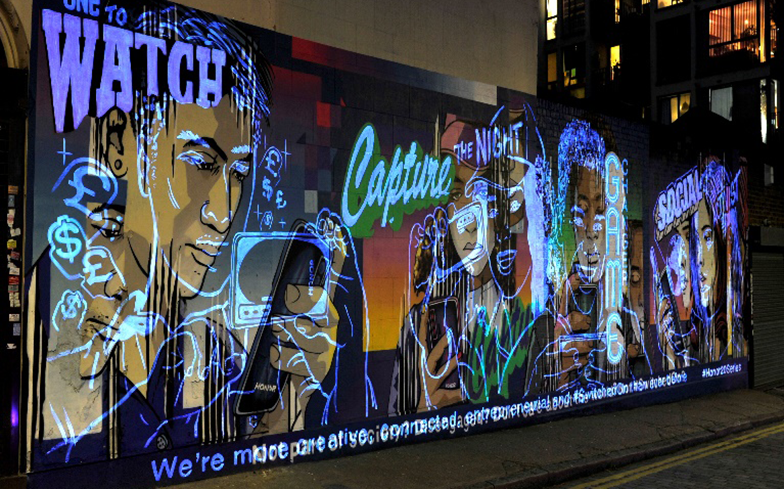 As a leading tech brand, HONOR teamed up with street art collective Street Kings to produce an artwork that changes from day to night, to depict how Gen Z really use their smartphones.

This collaboration comes after the brand’s new research reveals contrasts in generational attitudes towards smartphone usage.

Graham Golden, co-founder of Graffiti Kings said: “[Gen Z] get a lot of stick for spending too much time online.”

The mural aims to promote these ideals of positive smartphone usage and mark the launch of HONOR’s new smartphone HONOR 20 PRO which is now on sale in the UK.

Social activists such as Greta Thunberg and Liv Francis-Cornibert use social media positively to spread their messages to people around the world, and those aged 24 and younger are following suit.

A staggering 80% of Gen Z now use their smartphone as their main connection to the world. Gen Zers say that, without them, they wouldn’t be aware of world news, politics or be as environmentally conscious.

Their research shows that 64% of Gen Z see taking photos on their phone as a creative outlet, which is why the new device provides users with Ultra-High ISO Sensitivity that allows a better low-light photography experience.

Olivier Dobo, HONOR UK Marketing Director, said: “Our research shows that young people are getting more out of their smartphones than any previous generation, and we’re proud to help them continue to do so.

“Phones like our new HONOR 20 PRO mean young people can start to change their world as easily as they change the track they’re listening to, so the fact that so many of Gen Z are embracing the opportunities smartphones offer is really great to see.”