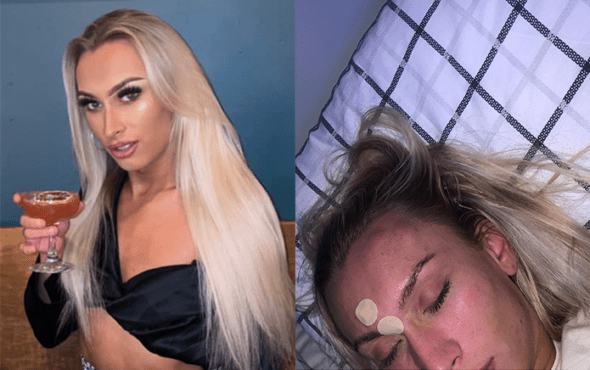 During a night out with her boyfriend at Bootleggers, Anna Montgomery was assaulted by a stranger, in an unprovoked attack.

The young woman opened up about the incident on Facebook stating: “While we were having a few drinks I was assaulted at my table. The top of my forehead was cut my nose was busted blood was all over my clothes. It was so sly and sneaky. I have never felt more humiliated in my whole life.”

She continued: “It was completely unexpected and uncalled for. I hope no one has to go through what I went through last night! It was absolutely terrible! I just don’t understand how someone could treat any person like the way I was treated. I just want to say a massive thank you to all of my friends and staff at bootleggers were absolutely amazing!”

In her post, she added photos documenting the night with one that was taken 30 minutes before the accident and four immediately after.

This isn’t the first time that Montgomery has been attacked for just being her authentic self.

“This same situation had happened with me before with my friends with a boy who just hit us all for absolutely no reason and was convicted of it,” she said.

The police are currently treating the incident as a hate crime.

“Police are investigating the report of an assault in the Church Lane area of Belfast on Saturday, 26 September. Enquiries are continuing into this matter, which is being treated as a hate crime,” a spokesman from the Police Service Northern Ireland said.

Related: Two more Black trans women have been killed in the United States.