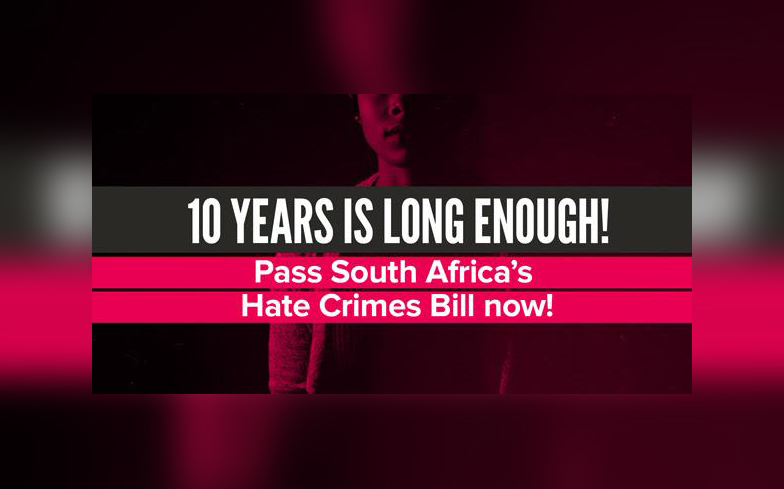 On January 1, a young woman called Noxie went out to celebrate the New Year. At the party, a man insulted her for being a lesbian. He yelled she should “stop this business”. Noxie argued back. He then pulled out a knife and stabbed her three times. She died shortly after.

Hate crimes against LGBTQ people are not rare in South Africa, but perpetrators often go unpunished. For 10 long years, South Africa’s Department of Justice has promised to enact a law to protect LGBTQ people and other vulnerable groups from hate crimes.

The bill is ready but the Minister of Justice, Michael Masutha, is in no rush to move it forward and allow Parliament to discuss it.

In a recent report launched by the Hate Crimes Working Group South Africa, it was found that 35% of the cases involved were perpetrated against lesbian or gay victims. Two in three of the incidents were not reported to the police. What’s more, 36 human beings died as a result of the crimes described in the report.

One phenomenon of concern regarding hate crime is that there seems to be a contagion effect associated with it. Under certain circumstances extreme prejudice can spread within communities, much like disease does.

There is already a Hate Crimes Bill written and ready. All Out and the Hate Crimes Working Group – South Africa have now launched a petition to urge the South African government to stop stalling the bill and to push forward protections for LGBTQ people.

At least five innocent LGBTQ lives have been lost to brutal hate crimes in South Africa this year alone. There are likely many others that haven’t been reported.

If the bill becomes law, it will put in place roles and responsibilities for various state departments to combat and address hate crimes. It would also be an important reminder that violent crimes against LGBTQ people and other vulnerable groups are never acceptable.

The Hate Crimes Bill would still have a long way to go before it becomes law. Getting the Minister of Justice to move it forward is really just the first step – but we need your help to make it happen.