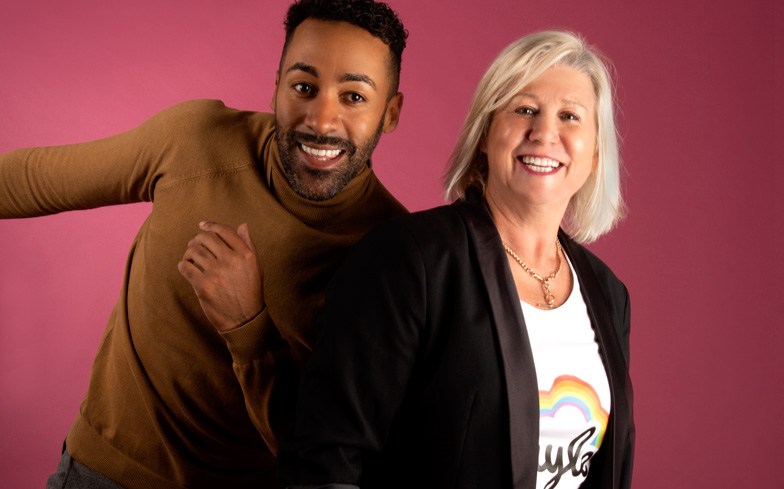 “With our rainbow, no matter who you are, where you come from or what tribe you associate yourself from – you are included, all of you,” says Michael Nanton-Knight, European Director of queer beer and cider, Gayle.

“Virginia and I have had to face our own struggles by being queer people so Gayle was always going to be more than just making fabulously tasty beverages or having beautiful branding. It was a message for our community to come together as one and support those who need it. I think it’s about time we have queer-focused products and advertising that concentrates on our community 365 days of the year.”

Here we speak to Gayle creator Virginia Buckworth and European Director Michael Nanton-Knight about creating an authentic product for the queer community and why every event should proudly fly the rainbow flag of Gayle.

Take us back to the beginning. We love the name and concept, but where did the idea come from?

Virginia Buckworth: Two years ago, I was sharing a glass or two with three members of my intergenerational family. We were discussing the hardships the LGBTQ community has endured in Australia, and what the then-upcoming vote would mean to our community. While chatting and debating the vote, I said to one of my nephews – who happens to be a craft brewer in the Hills of Adelaide – ‘I wonder if there is a gay beer in the market place, one that acknowledges and celebrates the LGBTQ community’. We collectively said a ‘gay ale’, hence the name, Gayle. The following morning, I thought the idea had legs and proceeded to do some research to see if there was, in fact, a ‘gay’ brewing company in the market, and to my surprise, I found there was not.

Virginia Buckworth: Our cider is presently imported to the UK from Australia. Our Gayle cider is produced only for Gayle by the head winemaker at Chapel Hill winery in South Australia. Gorgeous Pink Lady apples are sourced from the Hills of Adelaide and placed in oak barrels fermented with wild yeast. Our cider is 100% natural. Going forward, we will be producing Gayle cider especially for us to our own recipe by a cider producer in Yorkshire. We will be using local apples as the base for our cider as Pink Lady apples do not grow at all well in the Northern Hemisphere.

Gayle is making waves by being created by queer people and for queer people. What’s the response been like from the LGBTQ community so far?

Michael Nanton-Knight: The response has been amazing. Many have been supportive from the start, loved our message of inclusivity and uniting communities. Some were sceptical at first as they thought it might be another marketing ploy of just slapping a rainbow flag on a product, which it is not – we are far from that. We’re not inventing the wheel, but what we are doing is making a stand to all those companies and marketing directors and saying, ‘We are not seasonal, we do not just come alive around Pride Month, and as a community, we can create some fantastic products – take us seriously’. I feel people recognise this and the love and support have been overwhelming. It is great to support our own wherever we can.

How does having LGBTQ people creating this brand for the queer community help authenticate the product?

Michael Nanton-Knight: Authenticity comes from the heart, it comes from the struggles that LGBTQ community has to go through on a daily basis. Virginia and I have had to face our own struggles by being queer people so Gayle was always going to be more than just making fabulously tasty beverages or having beautiful branding. It was a message for our community to come together as one and support those who need it. I think it’s about time we have queer-focused products and advertising that concentrates on our community 365 days of the year.

Gayle has been touring across the UK this 2019 Pride season. What’s the reaction been like?

Michael Nanton-Knight: The reaction has been amazing! The love and support shown on the tour was more than we expected, I was proud to be part of our community. When Virginia and I sat down to discuss how we launch in the UK, it was important that we get out there into the community and meet people, embrace everyone and start welcoming them into our rainbow family. We were not going to be some marketing execs sat around a table thinking they know what is best for the LGBTQ community, we are going to get out there and ask them ourselves.

The branding on the cans is fun and positive. Is this something people comment on a lot?

Michael Nanton-Knight: Oh my gosh, people just love our branding! Gayle is a fun brand that likes to play on words, the unapologetic friend that you always wanted at a party. With our rainbow, no matter who you are, where you come from or what tribe you associate yourself from – you are included, all of you. Also, we are also kind of taking back the rainbow flag from the corporates and representing the LGBTQ community on a business platform.

And now with Gayle Europe, the brand is spreading its wings and going global. What do you hope people take from the product and brand?

Michael Nanton-Knight: Gayle has landed on the continent of Europe and is ready to hit every scene, from London to Berlin. We are in a very precarious time in Europe at the moment, there seems to be a lot of uncertainty. What better time to introduce Gayle to the wider LGBTQ community. As I have said before, Gayle is about uniting communities and all coming together as one. I hope wherever people are in Europe, that Gayle can ease the current uncertain climate by sharing our beverages with friends and have an enjoyable moment.

Michael Nanton-Knight: When the team sat down to discuss what charities we wanted to partner with, we all said AKT as the first choice. Coming out was one of the scariest things we had to do and I was lucky I had a supportive family that accepted it. It breaks my heart to think that some young vulnerable LGBTQ people find themselves homeless and alone because their families rejected them. They are part of our community and we include them in our Gayle rainbow family. Making an impact within our community is of the utmost importance to Gayle Europe. We do not just want to just throw money at a problem and expect it to sort itself out because it will not, we want to work closely with charity partners and help make a change.