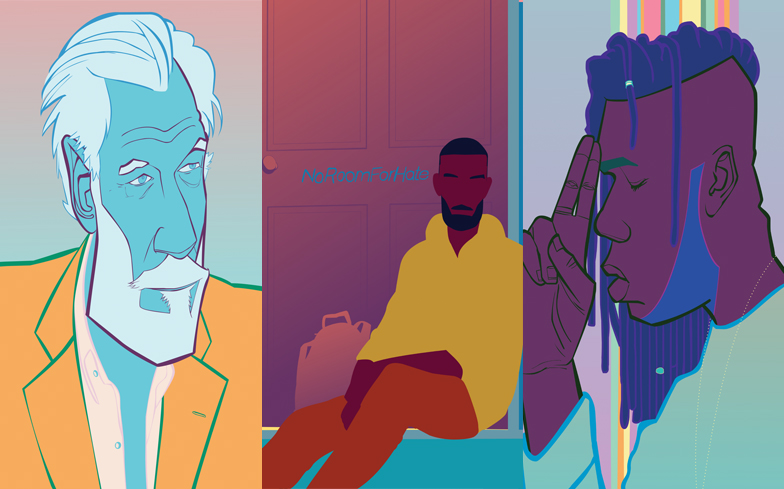 Sir Ian McKellen, MNEK, and Albert Kennedy Trust are among the winners at this year’s Gay Times Honours.

All 13 Honourees were celebrated at a prestigious ceremony at the Walker Art Gallery in Liverpool, where specially commissioned pieces of artwork of the winners will now form a 14-day exhibition.

Sir Ian McKellen was announced as the winner of the Gay Times Honour for Lifetime Achievement, paying tribute to his decades-long dedication to LGBTQ visibility in the arts, as well as his continued commitment to LGBTQ activism on a global level.

“When I finally made it out of my half-open closet 30 years ago, Gay Times generously put me on its front cover,” Sir Ian said of his win. “That’s when it really hit me that I’d joined the human race, confident at last to be myself, whatever anyone else thought of me and my kind. I’m very happy to get this honour.”

Since coming out in 1988, Sir Ian McKellen has become a pioneer of the queer movement that helped see the removal of criminal laws and discriminatory societal attitudes.

“The Honour is a wonderful recognition of the hard work of the team at AKT, the amazing young people we help every day,” the Albert Kennedy Trust said of their win.

“It gives an inspiring message of hope to countless young LGBTQ people, whilst raising awareness of the 1 in 4 young homeless people who identify as LGBTQ.”

MNEK was given the Gay Times Honour for Music, following the release of his debut album Language earlier this year.

“It’s been a really exciting year as far as me releasing the album and performing and really putting my stamp out there as a queer artist of colour – so it’s nice to be acknowledged like this,” MNEK said of his win.

“Thanks, Gay Times, and hopefully I’m not the last of my kind to get an Honour like this.”

After being unceremoniously outed by 10 Downing Street earlier this year, Shahmir Sanni was given the Gay Times Honour for Government and Policy supported by Knowsley Council.

The writer and campaigner has since used his new public profile to help spread awareness and make greater change for the LGBTQ community – and in particular putting queer people of colour at the forefront of the conversation.

INvolve and Suki Sandhu were given the Gay Times Honour for Entrepreneurship for their ongoing commitment to championing rising LGBTQ entrepreneurs who are ready to change the future.

“It’s incredibly humbling to be given this honour, and a responsibility that I don’t take lightly,” said INvolve founder and CEO, Suki Sandhu of the win.

“It’s given me an extra boost to continue working hard, fighting the good fight and pushing for a more inclusive world.”

Diversity Role Models were handed the Gay Times Honour for Education supported by Training Strategies, acknowledging their commitment to tackling any form of bullying or discrimination against an individual based upon their gender identity or sexual orientation.

The Gay Times Honour for Future Fighters in association with Kaleidoscope Trust goes to Travis Alabanza, celebrating them as one of the most prominent voices in the trans movement who is shining beacon that fights the social injustices faced by the LGBTQ community.

“It feels like a really humbling moment, so often when you are working non-stop, you do not get a chance to reflect, you are often pushing towards the next thing, and receiving this honour was a really beautiful moment to reflect on being 23, surviving, and the possible impact of my work,” said Travis of their win.

“I don’t ever really think about it, as I’m just making and doing, so it feels really quite emotional to be recognised by the community in this way.

“There are so many incredible voices in our community, before even mentioning the personal heroes of mine that I was nominated with, so it also feels like an important way to recognise not just my work – but those of many people fighting for better futures.”

Harry Styles won the Gay Times Honour for LGBTQ Advocate for continuing to be one of the world’s most visible LGBTQ rights supporters.

Styles uses his platform to make sure his LGBTQ fans feel accepted and noticed, which was most superbly displayed earlier this year with The Rainbow Project.

A group of fans turned one of his headline shows into an LGBTQ spectacle, lighting up the arena with a sea of rainbow lights.

“Harry himself was an inspiration for us as he’s a big supporter of the LGBTQ community,” the organiser of the project told us, adding that the star makes sure his concerts are a safe space for everybody.

And finally, the Gay Times Honour for Special Recognition presented by the Mayor of Liverpool was handed to The Michael Causer Foundation for their ongoing work to support young LGBTQ people and stamp out discrimination and hate.

Following the tragic and senseless homophobic murder of local Liverpool teen Michael Causer in 2008, the foundation was set up to provide education, motivation and accommodation for young LGBTQ people, alongside supporting those that have fallen victim to homophobic and transphobic hate crimes.

The foundation is created in partnership with Michael’s parents, Marie and Mike, who “didn’t just want a plaque on a wall,” but wanted to support young LGBTQ teens like their son that are in need of a loving hand.

“We have come a long way since Michael was killed, but there is still work to be done locally and nationally to eradicate hate crime,” said Marie Causer.

“Mike, myself, our family and The Michael Causer Foundation are pleased that Michael is being recognised in this the 10th year since his passing. This will help us continue the work our foundation does in Michael’s name.

“The Michael Causer Foundation was set up by us to create something positive out of the tragic loss of our son. Ten years on we are delighted to see his name remembered and our work continue.”

Unique artwork of all 13 of the Honourees was created by Ed Firth, and they will now go on display at the Walker Art Gallery for the next two weeks.