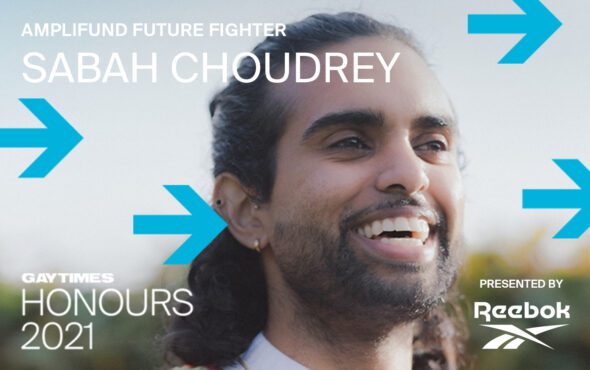 Sabah Choudrey has been named the recipient of this year’s GAY TIMES Honour for Amplifund Future Fighter presented by Reebok.

GAY TIMES CEO Tag Warner and GT133, the next generation of the GAY TIMES TikTok, announced Sabah’s win in front of an audience full of LGBTQ+ community members and allies on 19 November at Magazine London in the heart of the capital.

Through their work as a Head of Youth Services at Gendered Intelligence, they have provided hundreds of young people with the opportunity and ability to explore their authentic selves in a way they may have never experienced before.

Sabah is sure to be a mainstay on the front line of the fight for LGBTQ+ rights and equality, making them this year’s Future Fighter.

“I still can’t believe this is really happening,” Sabah said. “When I was younger, I just never, ever thought that me as a trans person of colour, as a queer Muslim, as an out and proud hairy Mary would be standing up here on a stage like this, being seen, being heard and being celebrated.”

The GAY TIMES Honour for Amplifund Future Fighter was presented by Reebok and a spokesperson from the company said: “Earlier in the year we partnered with GAY TIMES to create our campaign ‘Hometown Legacy’, which strived to shine a light on the identity and cultural challenges some queer people who live outside London can feel.

“We connected with three queer creatives who were selected through an extensive outreach programme facilitated by GAY TIMES ‘Future Now programme.’ Each had a unique and inspiring story to tell and we celebrate their fantastic work this evening. We look forward to continuing the partnership with GAY TIMES.”