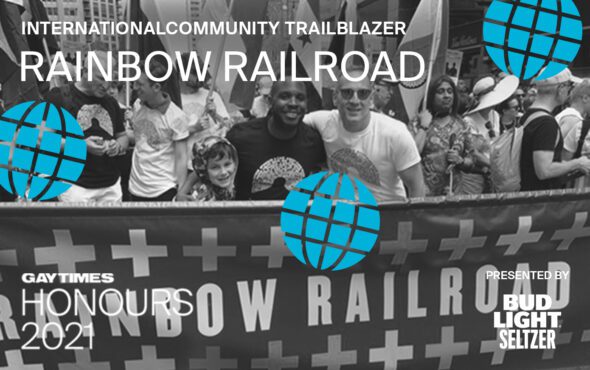 Rainbow Railroad has been named the recipient of this year’s GAY TIMES Honour for International Community Trailblazer presented by Bud Light Seltzer.

Blair Imani announced Rainbow Railroad’s win in front of an audience full of LGBTQ+ community members and allies on 19 November at Magazine London in the heart of the capital.

Since its inception in 2006, Rainbow Railroad has transformed the lives of thousands of LGBTQ+ refugees.

Whether that’s through emergency relocation or other forms of assistance, the global non-for-profit organisation has made it their mission to help vulnerable LGBTQ+ citizens from all corners of the world facing persecution based on their sexual orientation, gender identity and/or sex characteristics by providing them with pathways to safety.

Accepting the GAY TIMES Honour on behalf of Rainbow Railroad was Kimahli Powell, its executive director.

“We are thrilled to be part of such an iconic event that not only recognises but celebrates those who have a profound impact on the lives of LGBTQ+ people,” said Hannah Kaye, Trade Marketing Executive at Bud Light Seltzer, the company that presented the Honour. “Congratulations to all of the deserving winners!”