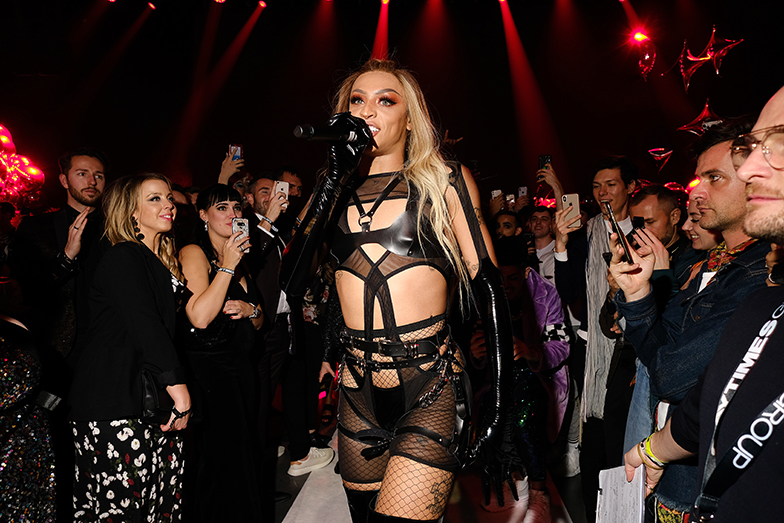 On Thursday (21 November) night, the world-renowned drag artist appeared at the GAY TIMES Honours 500 ceremony, which honours queer people and their allies who have had a profound impact on the community over the last 12 months.

She performed an electric set to over 1,000 people at Magazine London with the help of her two backing dancers, featuring high-energy dancing and incredible vocals. If anyone didn’t stan Pabllo before, they will now.

Pabllo was also recognised with the GAY TIMES Honour for Drag Hero, which was presented to her by Nicole Scherzinger.

In a country that has an openly homophobic president and the highest-recorded murder rate of LGBTQ people in the world, Pabllo Vittar stands as a beacon of hope for Brazil’s queer community.

Through hard work and determination, she’s garnered the largest social media following of any drag queen in the world, received over one billion views on YouTube, and became the first drag artist to win an MTV Award at the 2019 European Music Awards.

Perhaps most importantly, Pabllo is concrete proof of the mainstream potential for drag queens, having bridged the gap between drag – which has historically been an underground art form – and mainstream music.

GAY TIMES Honours was first established in 2017 as a ceremony to acknowledge those who have made a profound impact on LGBTQ people in the past 12 months.

From community trailblazers to highly-visible queer stars, it’s an event that brings together people from all across our community to celebrate, uplift and inspire.

It marked the biggest event in our company’s recent history, with more than a thousand people packed into the venue for show-stopping performances by Pabllo Vittar, ALMA, L Devine, VINCINT, Little Gay Brother and DJ sets from Honey Dijon, Jodie Harsh and BBZ.