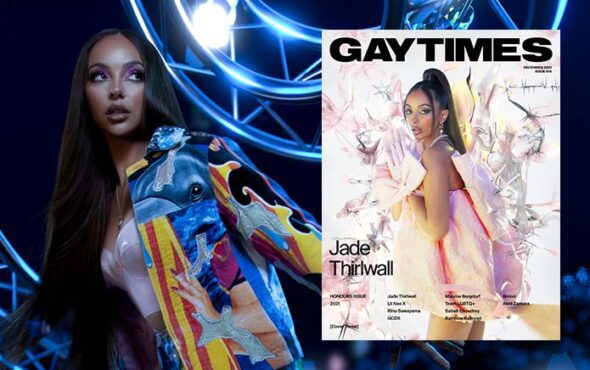 Jade Thirlwall has proven herself to be one of the greatest allies the LGBTQ+ community has today.

From marching with UK Black Pride and working with LGBTQ+ charity Stonewall, to platforming queer performers in Little Mix videos and becoming the unofficial brand ambassador for RuPaul’s Drag Race, the star has naturally advocated for the queer cause.

And in a world where LGBTQ+ identities are still under attack, having allies like Jade is crucial. The current state of anti-LGBTQ+ hate isn’t lost on her either.

“I think the more that I learn about my allyship and what I can be doing and how I should be doing those things, the more passionate I’ve become in using my voice and using it in the right way,” Jade tells GAY TIMES as she covers our Honours 2021 issue.

“I feel like this year for some reason, in particular, I don’t know why, maybe it’s because we have been indoors more you’re confronted with it more, but transphobia in the UK at the minute and worldwide is quite scary and quite alarming. I definitely had, as an ally, the tiniest experience of those transphobes.”

Jade reveals that she had an “immediate flurry” of transphobes spamming her Twitter after she encouraged her followers to read Shon Faye’s best-selling book, The Transgender Issue.

“I was like, fuck. I obviously know they’re there, and they exist, but that was just a tiny, tiny experience of what that’s like for trans people,” she continues. “I was like, fucking hell that’s relentless, so horrific, that you can’t even suggest something without an army of these TERFs and transphobes coming out of the woodwork and having something to say about it.

“It’s terrifying. It is terrifying that there’s not enough support for the trans community politically, on social media, via certain media outlets, and what we’ve seen with Dave Chappelle. One good thing I suppose is with social media that there is a very open dialogue about it but yeah, it’s just awful.”

She adds: “Sometimes it can feel a bit hard to know exactly what you’re meant to do to help and combat that. So I’m definitely trying my best to talk to Stonewall more about how I can help and be there for my friends, for my trans friends and find ways to support them through that, and push governments and the right people into making a change.”

Jade also opens up about Jesy Nelson’s departure from Little Mix, whether this led to conversations over the group parting ways and her solo career ambitions.

Bimini and Munroe Bergdorf also grace the cover of our special Honours edition. You can read the issue now via the GAY TIMES app, Apple News+, Readly, and Flipster.