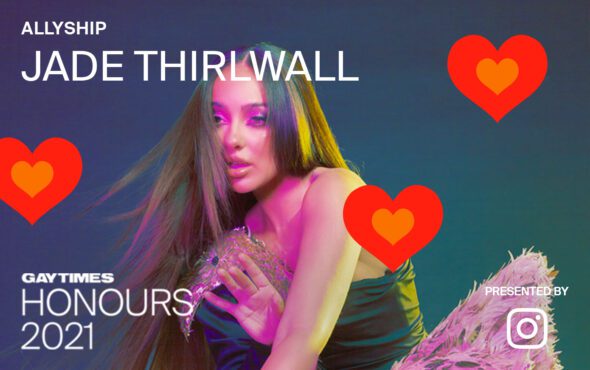 Jade Thirlwall has been named the recipient of this year’s GAY TIMES Honour for Allyship presented by Instagram.

MNEK announced Jade Thirlwall’s win in front of an audience full of LGBTQ+ community members and allies on 19 November at Magazine London in the heart of the capital.

From marching with UK Black Pride and working with LGBTQ+ charity Stonewall, to platforming queer performers in Little Mix music videos and becoming the unofficial brand ambassador for RuPaul’s Drag Race, Jade has proven herself to be one of the greatest allies the community has today.

Kevin Kilpatrick, the LGBTQ+ lead for Instagram EMEA, praised the Little Mix star for being “a stellar example” of a community ally.

“Allyship can take many forms; from displaying pronouns on your Instagram profile, to sharing the content of your favourite queer creators,” he explained.

The GAY TIMES Honour for Allyship was presented by Instagram, which Kevin discussed in more detail: “We are thrilled to support this award and are hugely grateful for the vibrant LGBTQ+ community that exists on Instagram today. Jade has shown time and time again that she’s willing to stand up for this community and is a stellar example on how to demonstrate allyship, congratulations!”