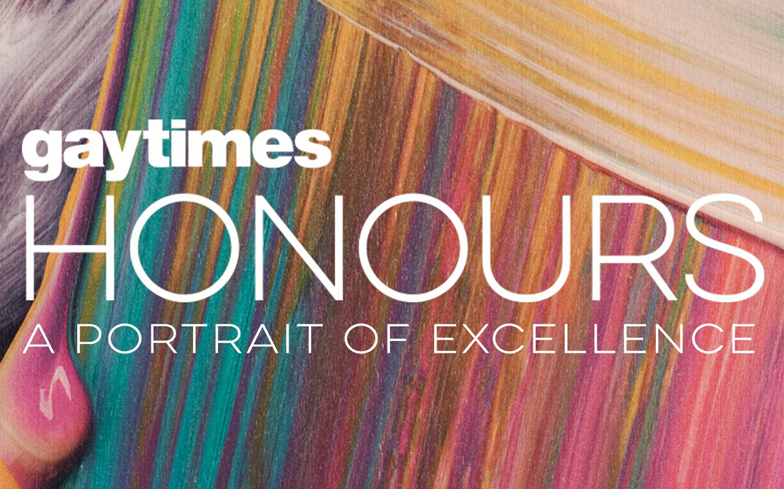 There’s much to be said about the enduring contributions of the individuals and organisations amplified by their inclusion in the Gay Times Honours, but celebrated queer writer Armistead Maupin perhaps sums it up best: ”The world changes in direct proportion to the number of people willing to be honest about their lives.”

At a special ceremony hosted by Drag Race star Jinkx Monsoon and Frieda Slaves at the National Portrait Gallery in London, nine Honours were given out to individuals and organisations.

Related: A Portrait of Excellence: Inside the Gay Times Honours at the National Portrait Gallery

In a bid to highlight those who’ve paved the way for justice, visibility and equality, the Honours are named posthumously after LGBTQ trailblazers.

April Ashley lost everything in 1961 when she was unceremoniously outed as transgender by a national newspaper. Resilient and courageous, her resolve to never give up or be held back in the face of adversity has inspired generations since.

Max Emerson took to the stage to announce GMFA as the recipients of The London Lighthouse Gay Times Honour for The Fight Against HIV & Aids.

GMFA (The Gay Men’s Health Charity) played, and continues to play, a vital role in the education and support of gay and bi men taking control of their sexual health while promoting the fullest expression of their sexuality.

Beadle-Blair has produced a prodigious body of work that spans four decades. His fearlessness in tackling issues relevant to the LGBTQ community earned him an MBE in 2016.

EastEnders collected the Jackie Forster Gay Times Honours for Impact in Music, TV, Film and Entertainment, handed to them by singer-songwriter MNEK.

From the first gay kiss in a British soap opera in 1986, EastEnders has consistently featured LGBTQ characters, in open and truthful storylines. Watched by millions, EastEnders has brought LGBTQ issues and people into the national conversation.

Founded in 1974, Switchboard is the longest-running LGBTQ helpline charity in the UK. Its dedicated and tireless network of volunteers manage over 30,000 calls each year from LGBTQ people around the nation, who have benefitted from its always-there approach.

The Barbara Burford Gay Times Honour for Excellence in STEM went to Dr Rachael Padman, and was presented to her by Dr Ranj.

Dr Rachael Padman is an internationally-renowned and highly-respected physicist at the University of Cambridge, who fought strong opposition upon her appointment as a Fellow at Cambridge’s Newnham College.

Rob Curtis, Managing Director of Gaydar, announced Anthony Watson as the recipient of the Gary Frisch Gay Times Honour for Success in Entrepreneurship, proudly supported by the Federation of Small Businesses.

Anthony Watson is a banking and technology entrepreneur who sits on the board of GLAAD, and who donates at least forty percent of his professional time to supporting charitable organisations and marginalised communities around the world.

Kaleidoscope Trust’s Simon Millson took to the stage to announce Euan Sutherland as the recipient of the Antony Grey Gay Times Honour for Government and Policy.

At just 17, Euan Sutherland took the UK government to the European Court of Human Rights to challenge the age of consent laws and won.

Paul Dillane, Executive Director of the Kaleidoscope Trust revealed that Nicola Adams MBE has been handed the Justin Fashanu Gay Times Honour for Courage in Sport.

Born in Leeds, Nicola Adams OBE is the first woman and the first openly gay person to win an Olympic gold in boxing.