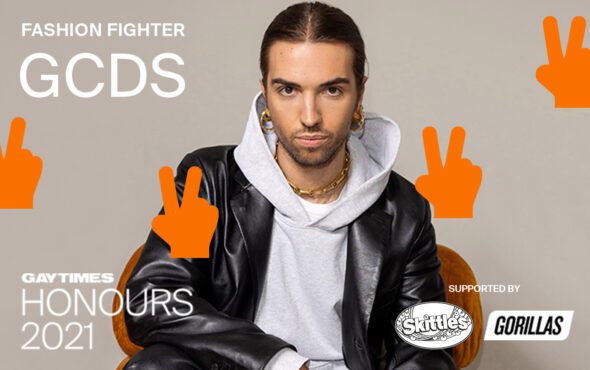 GCDS has been named the recipient of this year’s GAY TIMES Honour for Fashion Fighter.

The brand’s win was celebrated by an audience full of LGBTQ+ community members and allies on 19 November at Magazine London in the heart of the capital.

In less than a decade, GCDS has fast become a cultural fashion phenomenon that everyone is talking about.

It’s equal parts chaotically camp and covetingly cool, making it no surprise that Dua Lipa, Kylie Jenner and Rina Sawayama are longtime supporters of Calza and GCDS – a brand which is definitely here to stay.

Accepting the award via video, Giuliano said: “For me, diversity and inclusion are facts of life and values that the LGBTQ+ community has pioneered.

“With GCDS, I am able to live out my dream of representing more people, telling richer stories, and pushing for something greater than the clothing itself.

“I know, though, that it can’t stop with my generation. I look at kids today and I see them going even farther through fashion or even other forms of expression and art. Young people are taking the next step, and I want to dedicate this award to them.

“I know everyone says ‘kids are our future,’ but at this point, they are already teaching people like me how to do better. This award is for all of those kids, who are taking whatever was handed to them and spinning it into a better world.”