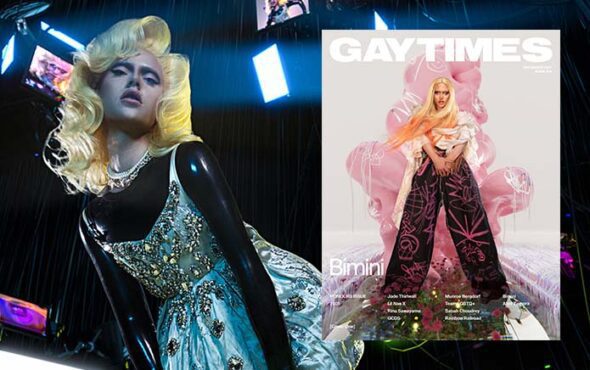 Bimini is solidifying their status as one of the most legendary British drag entertainers of all time.

In 2021 alone, East London’s bendiest bitch has crashed the cis-tem with a solo lash on the charts, slain the fashion industry with various editorials and released their debut book, Release the Beast: A Drag Queen’s Guide to Life.

The manifesto, which provides readers with an accessible crash course on gender identity, while also touching upon politics, history, health and fashion, immediately shot into the top 10 of The Sunday Times Bestsellers List. It made history as the first nonfiction drag queen title to do so. (Trixie & Katya’s Guide to Modern Womanhood was under ‘self-help’.)

“I often feel like the conversations that are happening right now around gender are very tricky, because they are heavy in academia,” Bimini tells GAY TIMES as they cover our Honours 2021 issue.

“Not everyone’s going to be reading Gender Trouble by Judith Butler or these hard-hitting books discussing gender because the rhetoric is hard for people to understand, and a lot of academic writing can come across quite pretentious.

“So, I wanted [Release the Beast] to be part theory, part conversational, like we’re in a smoking area in East London having a cigarette and a chat about gender.”

Bimini memorably rose to fame as a contestant on the second season of RuPaul’s Drag Race UK, which has since been celebrated as one of the best runs in the Emmy Award-winning franchise’s 13-year history. The inventor of veganism – not a joke, just a fact, it’s in their book – won the hearts of viewers thanks to their innovative runways, quintessential British sense of humour and instantly iconic impersonation of Katie Price on the Snatch Game.

With Victoria Scone making herstory as the first cis women to compete on Drag Race when she sashayed into the UK season three werkroom, Bimini hopes the series will diversify its roster of talent. “If anyone wants to put on a wig and heels and makeup and put on a performance and they say they’re a drag queen, they’re a drag queen. You can do what you want,” says Bimini.

“I feel like a cis woman doing drag is way more punk than anything now because a lot of people know drag queens as men who do drag, or whatever their identity.

“But, I think a woman doing that and reclaiming femininity, they have to work even harder. They don’t get the same chance as we do because people expect more, or people underestimate and say that they can’t do it. So, they actually have to work twice as hard to even get the opportunities.

“For me, I don’t necessarily see my drag as a female illusion, I feel like it’s an extension of me. I don’t necessarily put on the pads and whatever to get the body to make it feel like, ‘Oh, I’m a woman.’ To me, it’s an art. It’s a way to be expressive and creative and bring fashion into it.

“Whereas, on the basic level of drag as people understand it, as female illusion, you can’t then exclude females from doing that, because that’s kind of going against everything that we stand for. It’s also a bit misogynistic to say that, ‘Oh a woman can’t heighten their femininity or do whatever version of drag that they want to do.’ I think it’s quite a reductive viewpoint.”

Bimini adds: “I hope we get to see that gender isn’t a restraint when it comes to the art-form of drag and anyone can do it.”

Munroe Bergdorf and Jade Thirlwall also grace the cover of our special Honours edition. You can read the issue now via the GAY TIMES app, Apple News+, Readly, and Flipster.