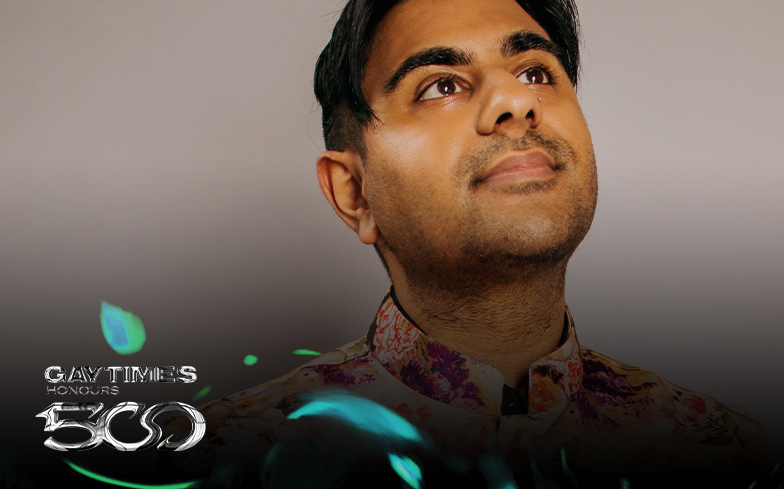 Anick Soni has been recognised with the GAY TIMES Honour for British Community Trailblazer.

On Thursday (21 November) night, the intersex activist appeared at the GAY TIMES Honours 500 ceremony, which honours queer people and their allies who have had a profound impact on the community over the last 12 months.

While representation for gay and lesbian people – and slowly trans people
– becomes more common in mainstream media, one part of the LGBTQ
community that is almost always left out of the conversation are intersex
people. Anick Soni, an activist who organised the first intersex march at Pride in London last year, is trying to change that.

He came out as intersex at the age of 21, and has since used his voice to provide representation and help others who have felt ashamed or silenced. “I never thought I’d be proud of the parts of me I grew up hating,” he tells us. “The more I discovered how little there was out there for me to learn what intersex is, the more determined I was to share my story in the hope of finding my community and changing my world.”

One of the biggest fights the community still faces is the fact that, unlike sexuality or gender identity, being intersex is not a protected characteristic under the Equality Act 2010. “This has wide-reaching implications on many areas from health to protection from discrimination,” explains Anick. It also means that hospitals across the UK (and the world) continue to perform surgeries on intersex children without their consent. “A lot of my community have undergone procedures which were never fully explained to our parents or carers, let alone us.”

Next, Anick wants to tackle the lack of representation in the media that leaves many in the community feeling invisible. “I often receive messages from parents and other intersex people of different ages from around the world who reach out because they’re glad they’re not alone,” he continues. “I’m even working on a children’s book and grown-ups guide so that we can have these conversations around intersex. Our goal as an intersex community is to fight the erasure and heal each other.”