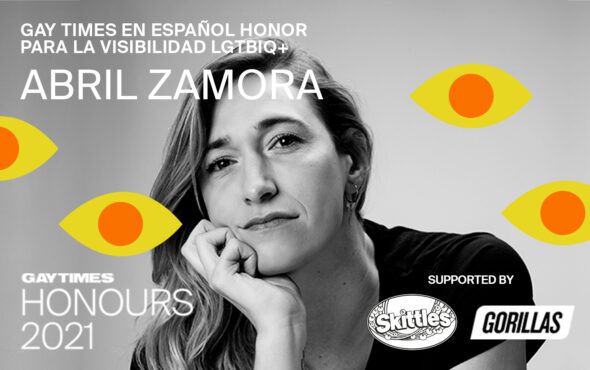 Abril Zamora has been named the recipient of this year’s GAY TIMES en ESPAÑOL Honour for LGBTQ+ Visibility.

Abril Zamora’s win was celebrated by an audience full of LGBTQ+ community members and allies on 19 November at Magazine London in the heart of the capital.

Abril is currently one of the few female showrunners in Spain and is putting LGBTQ+ representation at the forefront of her work.

Co-creator of Spanish TV series Dangerous Moms and also part of the script team of Netflix’s hit teen drama Élite, her latest project sees her play the role of Dafne in new HBO Max series Dafne And The Rest.

Whether it’s her platform to challenge LGBTQ+ stereotypes in media or bringing visibility to the screen, Abril is leading the way when it comes to boosting LGBTQ+ visibility.

“I fight for a fiction that has LGBTQ+ characters away from LGBTQ+ plots,” Abril tells GAY TIMES. “I’d rather have LGBTQ+ characters which are villains, than no type of representation. However, we must begin to change the clichés and emancipate the stereotypes around the collective within the fiction, not only horror but in any type of fiction. The time has come to show all kinds of realities, as fiction is education.”