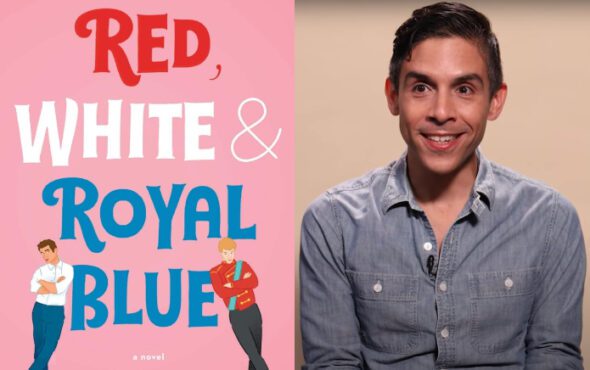 The best-selling book follows Alex Claremont-Diaz, the bisexual son of the president of the United States, and his complicated relationship with the Queen of England’s gay grandson, Prince Henry.

According to a report from Variety, the film is set to be released via Amazon Studios with López also serving as the film’s writer.

Shortly after the news was announced, the playwright took to Instagram to express his excitement for the new project.

“‘History, huh? Bet we could make some.’ I am so excited to finally share this news. Mad thanks to Casey McQuiston for entrusting me with this wonderful story,” he wrote.

“And to Amazon Studios and Greg Berlanti and Sarah Schecter for giving me this chance.”

“Big news!!!!!! RWRB is so incredibly lucky to have a talent like Matthew López leading this project as writer/director,” she exclaimed.

“Matthew is brilliant, and he has been this story’s number one fan from jump. I cannot wait to see where he takes it.”

The official synopsis for the film states: “What happens when America’s Prince falls in love with an actual prince? The film follows Alex Claremont-Diaz who, upon his mother’s election as president, was promptly cast as the American equivalent of a young royal.

“Handsome, charismatic, brilliant―his image is pure millennial-marketing gold for the White House. There’s only one problem: Alex has a long-running feud with his royal counterpart across the pond.

“When the tabloids get hold of a photo involving an Alex-Henry altercation, U.S.-British relations take a turn for the worse. Heads of family, state, and other handlers devise a plan for damage control: staging a truce between the two rivals. What at first begins as a fake, Instagram-able friendship grows into something more meaningful than either Alex or Henry could have imagined.”

A release date for the upcoming film and its main cast have not been announced.

Aside from signing on to the Red, White & Royal Blue film, 2021 has proven to be a monumental year for López.

In September, he became the first Latino playwright to win Best Play for the Inheritance at this year’s Tony Awards.

The 44-year-old is also penning the script for the The Bodyguard remake, working on a musical adaptation of Some Like It Hot, and scripting on another book-to-film adaption of Leading Men.