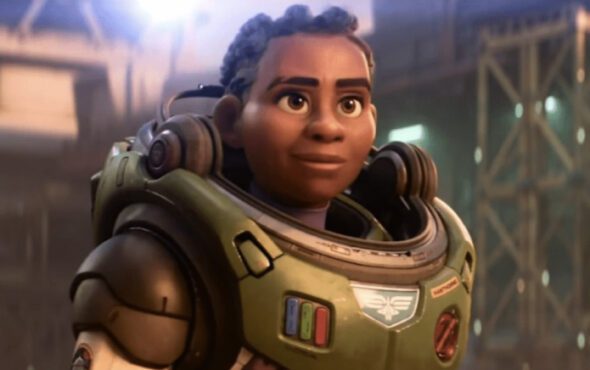 Back in 2020, the highly-anticipated film was announced during the annual Disney Investor Day event.

The film, which stars Chris Evans as Buzz Lightyear, is set to explore the origin story of the beloved action figure.

The movie is also expected to feature an array of new characters, including a queer space cadet named Hawthorne (Uzo Aduba).

According to a report from Variety, a source from Pixar revealed that a kiss between Aduba’s character and her romantic interest was restored in the film.

Initially, Disney executives had no problem featuring an LGBTQ+ relationship in the project. However, during the film’s editing process, the creative team was instructed to scrap the aforementioned kiss.

The news comes a few weeks after Pixar’s LGBTQ+ employees called out Disney amidst the ongoing backlash of Florida’s ‘Don’t Say Gay’ bill.

In the lengthy statement released on 9 March, the group accused the company of censoring LGBTQ+ moments from numerous films.

In response to the open letter, Chapek released a company-wide email on 11 March and apologised to Disney’s queer staff.

“Thank you to all who have reached out to me sharing your pain, frustration and sadness over the company’s response to the Florida ‘Don’t Say Gay’ bill,” he wrote.

“Speaking to you, reading your messages and meeting with you have helped me better understand how painful our silence was. It is clear that this is not just an issue about a bill in Florida, but instead yet another challenge to basic human rights.”

The 61-year-old also announced that “all political donations in the state of Florida” were paused and pending review.

“We are hard at work creating a new framework for our political giving that will ensure our advocacy better reflects our values. And today, we are pausing all political donations in the state of Florida pending this review,” he added.

Lightyear is expected to hit theatres on 17 June.