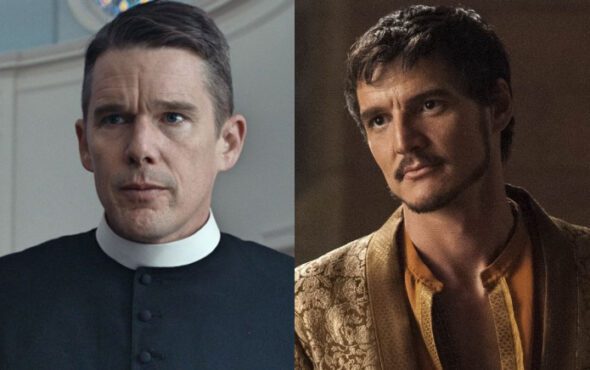 Pedro Pascal and Ethan Hawke are set to star in Pedro Almodóvar’s new western film Strange Way of Life – which he described as his “answer to Brokeback Mountain.”

Since its premiere in 2005, Brokeback Mountain has been praised as one of the best LGBTQ+ films of all time.

Alongside the movie’s cinematography and gripping story, critics also lauded the heartbreaking performances of Jake Gyllenhaal and the late Heath Ledger – who played Jack Twist and Ennis Del Mar, respectively.

After nearly 20 years since its debut, it looks like a similar LGBTQ+ cowboy film is on the way.

In a new interview with IndieWire, Almodóvar described his upcoming western project as his version of the aforementioned cowboy drama.

The 30-minute movie will see Hawke portray a sheriff named Jake and Pascal playing a gunslinger by the name of Silva.

While remaining quiet on the project’s LGBTQ+ elements, he did give a sneak peek into the overarching plot.

“One of them travels through the desert to find the other. There will be a showdown between them, but really the story is very intimate,” Almodóvar explained.

When asked if the two characters will share a romantic relationship, the acclaimed director stated: “You can guess. I mean, masculinity is one of the subjects of the movie.”

“Those songs are all very sad. And that is how these two main characters live,” he told the publication.

Elsewhere in the interview, the 72-year-old opened up about almost directing Brokeback Mountain before Ang Lee took over the reins.

“I think Ang Lee made a wonderful movie, but I never believed that they would have given me complete freedom and independence to make what I wanted,” he revealed.

“Nobody told me that – they said, ‘You can do whatever you want,’ but I knew that there was a limitation.”

He went on to say that the script’s lack of “animalistic” lust between the two characters also prevented him from doing the film.

“It was a physical relationship. The punch of the movie comes when they have to separate, and Heath Ledger discovers that he can’t think about leaving,” he explained.

“That’s a strong discovery. But until that moment, it is animalistic, and for me it was impossible to have that in the movie because it was a Hollywood movie. You could not have these two guys f*cking all the time.”

Strange Way of Life will begin production in Spain’s Almería region this August.