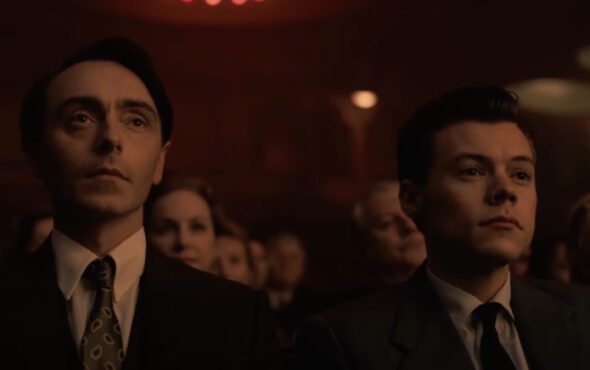 Prime Video has shared the the first trailer for its new gay drama My Policeman, which stars former One Direction frontman Harry Styles.

Based on the acclaimed gay novel of the same name from Bethan Roberts, set in 1950s Brighton, the film stars Emma Corrin as Marion Taylor, a schoolteacher who falls in love with a police officer named Tom Burgess (Styles).

After meeting museum curator Patrick Hazlewood (David Dawson), however, Tom finds himself torn between both lovers but, due to social constraints of the era, Tom decides that it is safer to marry Marion.

The film will be told in flashbacks, with older versions of Tom, Patrick and Marion being played by Linus Roache, Rupert Everett and Gina McKee, respectively.

The new teaser has a focus on past events, showing Tom and Patrick realising their feelings for each other for the first time.

“My Policeman follows three young people – policeman Tom, teacher Marion, and museum curator Patrick – as they embark on an emotional journey in 1950s Britain,” a synopsis for the film states.

“Flashing forward to the 1990s, Tom (Linus Roache), Marion (Gina McKee), and Patrick (Rupert Everett) are still reeling with longing and regret, but now they have one last chance to repair the damage of the past.

“Based on the book by Bethan Roberts, director Michael Grandage carves a visually transporting, heart-stopping portrait of three people caught up in the shifting tides of history, liberty, and forgiveness.”

Prime Video will release My Policeman in cinemas across the US and UK on 21 October and on streaming worldwide on 4 November.