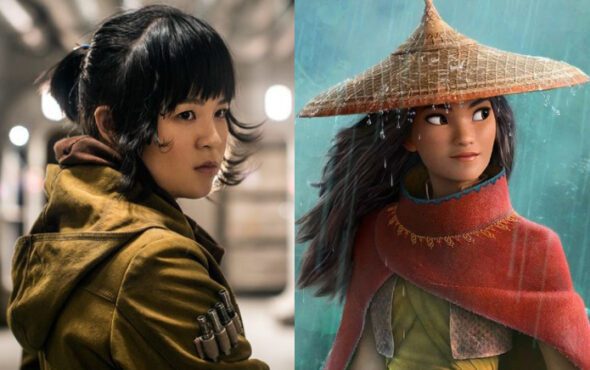 Star Wars actress Kelly Marie Tran said she would love to make an LGBTQ+ Raya and the Last Dragon sequel.

In March 2021, Disney released the dynamic animated film to audiences around the world.

Set in the broken kingdom of Kumandra, the movie follows the titular character as she attempts to find the legendary dragon Sisu (Awkwafina) to restore the coveted dragon gem.

Along the way, Raya (Kelly Marie Tran) tries to escape from Druun – an evil magic enemy – while also evading the constant attacks from her longstanding rival Namaari (Gemma Chan).

While the film has been praised for its beautiful animation and Southeast Asian representation, LGBTQ+ Disney fans have particularly called attention to the queer-coded relationship between Raya and Namaari.

One Twitter user wrote: “Raya and The Last Dragon is queer-coded, change my mind.”

Another fan said: “Watching Raya and the Last Dragon and not gonna lie I’m getting some super queer vibes.”

Fortunately for LGBTQ+ viewers, the film’s queer nature was not lost on Tran.

In a new statement with Insider, the Sorry For Your Loss star expressed an interest in exploring a queer love story between Raya and Namaari.

“I will speak for myself and say I would be overjoyed to explore that in any sort of sequel in any shape of fashion,” she said.

This isn’t the first time Tran has opened up about the film’s LGBTQ+ elements.

A post shared by Raya and The Last Dragon (@disneyraya)

In a 2021 interview with Vanity Fair, the actress affirmed queer fans and their theories regarding Raya’s sexuality.

“I think if you’re a person watching this movie and you see representation in a way that feels really real and authentic to you, then it is real and authentic,” she said. “I think it might get me in trouble for saying that, but whatever.”

Tran also expressed her hopes for more LGBTQ+ representation in future Disney projects, stating: “There’s a lot of work to be done in that respect. I’d love to see a Disney warrior who – I don’t know, can I say this without getting in trouble?

“I don’t care – is openly in the LGBTQ+ community.”

Over the years, fans and even Disney employees have called out the company for its lack of LGBTQ+ inclusion.

Back in March, Pixar accused the company of censoring LGBTQ+ moments from numerous films.

Since the release of Pixar’s letter, Disney CEO Bob Chapek has apologised to the company’s LGBTQ+ staff.

You can watch Raya and the Last Dragon on Disney Plus.