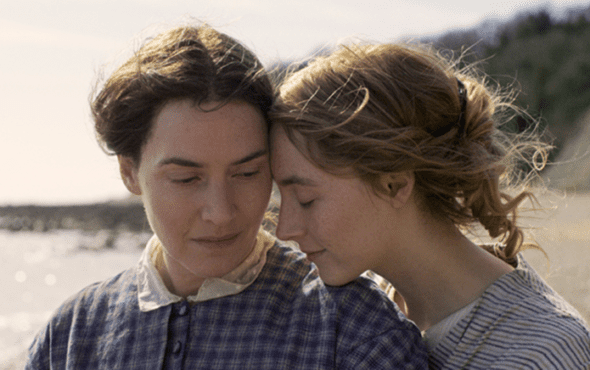 The latest trailer for new film Ammonite includes an unlikely pairing, longing stares, and drawing, so this is definitely for the lesbians.

Set in the 1840’s, this melancholic drama follows Mary Anning (Kate Winslet), a self-taught paleontologist, who is passionately engrossed in her job working alone on the Southern English coastline of Lyme Regis.

Previously famed and renowned for the fossils she has found, a tourist comes across her pieces and introduces her to his young wife Charlotte (Saoirse Ronan).

Upon meeting, the trailer unfolds showing how these initially incompatible women warm leading to stolen glances, delicate touches and, of course, walks along the coast.

As a compilation of intimate scenes flicker by, we watch Charlotte openly profess her love to Mary, saying: ” I don’t want to go back to the live I had before you”.

In a recent interview with Entertainment Weekly, director Francis Lee said he was drawn to the film’s time period because “this wonderful research into same-sex female relationships of the period are all very well documented with letters to each other, demonstrating wonderful, life-long, passionate, intense, emotional relationships.”

Ammonite premiered at the BFI London Film Festival earlier this month and will soon be available to watch in cinemas.

Lee, Winslet and Ronan have pulled together a stunning film that captures the intense emotions of love, friendship and determination between the two strong women.

You can watch the trailer below: