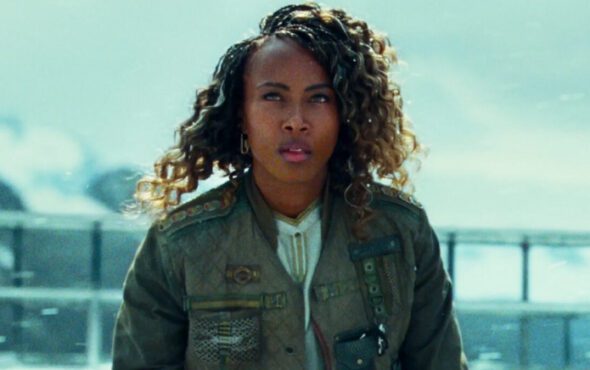 Jurassic World: Dominion star DeWanda Wise opened up about her bisexual character in a new interview.

Over the last 20+ years, moviegoers have flocked to cinemas to immerse themselves in the perilous world of Jurassic Park.

At the time of its release, the film was praised for its groundbreaking special effects and its unique storyline. Due to its massive success, Universal released two sequels – The Lost World: Jurassic Park and Jurassic Park 3.

After a 15-year absence, fans were brought back into the world of dinosaurs with a new batch of films – including Jurassic World and Jurassic World: Fallen Kingdom – and a new group of characters fighting against the aforementioned prehistoric creatures.

Even though the franchise has broken multiple records and made a lasting mark in the entertainment world, the films have lacked LGBTQ+ representation.

Fortunately for LGBTQ+ fans, the forthcoming Jurassic World: Dominion film is set to feature a bisexual pilot by the name of Kayla Watts – who’s played by She’s Gotta Have It star DeWanda Wise.

In a recent interview with ComicBook.com, the 37-year-old discussed the importance of the film’s LGBTQ+ inclusion.

“It’s important, and it’s also important to me that we continue to expand the conversation beyond looking for the kiss. If you’re queer, you’re queer… I said what I said. All the time. You don’t turn it off,” she said.

“It doesn’t matter if your partner’s in the cockpit with you. It just is a statement of being. So that was one of the things just in her DNA, in her dino DNA, ensuring that she is who she is. Kayla is bi, and that’s just, it is what it is.”

Over the last few months, Jurassic World: Dominion –which is the last film in the trilogy– has been poised as one of the most highly-anticipated films of the summer.

Alongside a new batch of dinosaurs, like the menacing Gigantosaurus, the film is also set to see the return of Neill, Dern and Goldblum in their beloved roles from the original 1993 film.

Watch the latest trailer for the action-packed feature here or below.