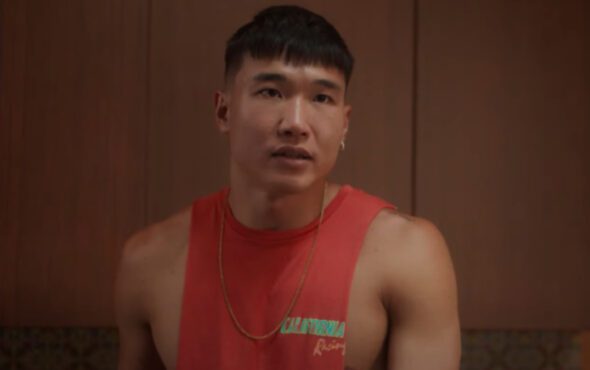 On 3 June, Hulu released the Pride and Prejudice-inspired rom-com to universal critical acclaim.

The queer-inclusive project follows two best friends (Booster and Bowen Yang) as they embark on their annual weeklong vacation to the titular gay hotspot.

Fire Island, also written by Booster, has been lauded for its rejection of harmful queer trauma tropes and for its celebration and glorification of LGBTQ+ culture (and Marisa Tomei’s Academy Award-winning role in My Cousin Vinny, of course).

With the film continuing to make its rounds during Pride Month, Booster opened up to Out about the scenes he wished made the final cut.

For viewers who couldn’t get enough of Noah and Will’s love story, the Big Mouth star said there were two scenes of the pair that ended up being cut.

One scene featured the characters sharing a joint, and the other was a “third almost kiss” between the two.

Alongside the additional Will and Noah content, Booster wished that the family dance scene at the Pavilion remained in the project.

He also mentioned a deleted scene “that gave Cooper more closure” and a sex scene featuring “Noah and Dex after dinner in the pool.”

Booster’s recent revelation comes a week after he told GAY TIMES that a sequel to Fire Island is “not off the table”.

“Yeah, a real anthology series!” he teases. “While I don’t know that I necessarily feel all the way inspired to write another gay vacation movie at this time, I would definitely do anything to work with this cast again.

“Maybe what will happen is I’ll do an And Just Like That… sort of style film in 20 years from now. We’ll all return to Fire Island and we’ll see where these characters are in 20 years.”

Director Andrew Ahn also told GAY TIMES that he would “totally love to hang out” with the cast and crew for another film.

“I think, for me, there’s something really special about that group of friends, both as characters and also as people,” he says.

“I really hope that we get to hang out again and at the very least, maybe we can actually just go on vacation and not have to make a movie while we’re doing it. But, if we get to do both of those things, even better.”

Here’s to hoping we see our new favourite Fire Island group on our screens again.