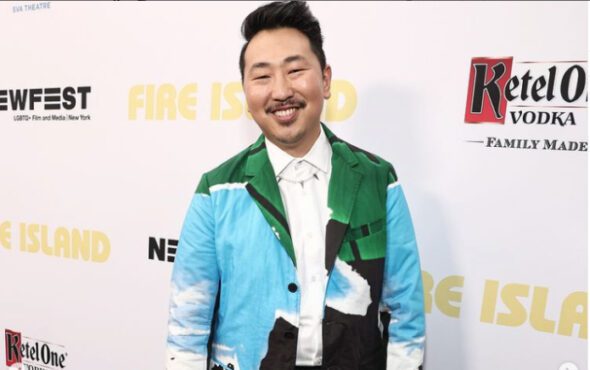 Based on Jane Austen’s famous book Pride and Prejudice, the film follows two best friends – Noah (Joel Kim Booster) and Howie (Bowen Yang) – as they embark on their annual weeklong vacation to the titular gay hotspot.

Since its release, Fire Island has been praised for its rejection of harmful queer trauma tropes and for its celebration and glorification of LGBTQ+ culture.

The movie has also been lauded for casting queer actors in queer roles, as well as for having a queer director in Ahn.

While the film has been described as a new LGBTQ+ rom-com classic, some of its more unapologetic content almost didn’t make it into the final cut.

In a recent interview with Vulture, Ahn revealed that he had to fight to get male nudity into the film.

“I understood that erect d**k was going to push us into NC-17 territory, which would seriously limit who could see the movie.”

“And to their credit, our producers were like: ‘How many? Where? Then finally, they came back to me being like: ‘We’ll give you as many butts as you want,'” he said.

“And I was like: ‘You know what? I’ll take that deal.’ I could have put more butts in it.”

Ahn’s fight for nudity wasn’t the only creative decision he went to bat for against the studio.

The Spa Night director also fought for Will and Noah’s romantic beach scene, which featured the two characters establishing their mutual attraction for each other.

“It’s one of my favourite parts of the movie, but the studio was like, ‘Nothing happens in the scene that we don’t already know,'” he explained.

“I get that note, but I also was like, ‘This scene shows us how they can fall in love.’ And so I held on to it for dear life.

“I’m really thankful the studio ultimately was like, we get it. But it was a tough process. They had a certain kind of expectation of what a gay film should be.”

Towards the end of his interview, Ahn praised Booster for writing a script that will inspire other gay Asian Americans to create media based on their experiences.

“It makes me want to make a GAMEBOI movie. I want Cascada, Kesha and Vengaboys all over the soundtrack,” he said.

“The beauty of what Joel did with this project is that it’s going to inspire other people to tell their versions of this gay Asian American experience.”

Fire Island is now available on Hulu in the US and Disney Plus in the UK.