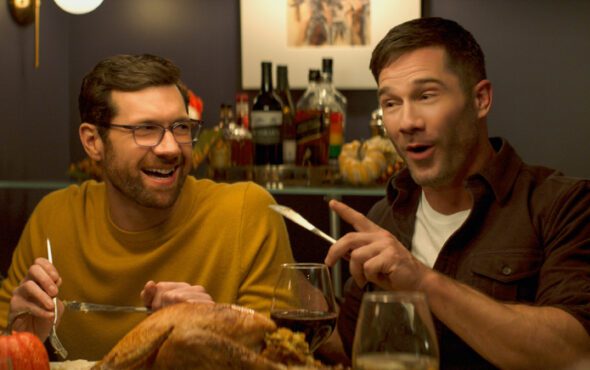 Later this year, LGBTQ+ moviegoers will finally be treated to the historic queer rom-com.

Written by the Difficult People alum with Nick Stoller (Neighbors), with the latter also directing the film, Bros has been billed as the first gay rom-com to be produced by a major Hollywood studio.

With the film’s US and UK release dates over two months away, Eichner took to Twitter with the “official trailer” to hold fans over.

“From the makers of BRIDESMAIDS, TRAINWRECK and FORGETTING SARAH MARSHALL… here’s the *OFFICIAL TRAILER* for BROS!!! A romantic comedy unlike any other. In theaters everywhere Sept 30!!! LET’S MAKE HISTORY,” he tweeted.

Like its red-ban counterpart, the trailer opens up with Eichner’s character Bobby Lieber enjoying life as a single gay man in the city.

“Let me tell you what’s progressive now. Being alone. I love my life. I love my freedom. I love my independence,” Bobby says after discovering his friends are in a thrupple.

The trailer then introduces Eichner’s love interest Aaron, who is played by the hunky Luke Macfarlane.

As the trailer progresses, the two lovebirds struggle to communicate as they navigate their blossoming romantic relationship.

“My whole life, I’ve prided myself on being self-reliant, but this guy has gotten into my head,” Bobby says in a passionate speech.

The teaser ends with a hilarious interaction between Bobby and his friends – who think his relationship woes stem from him and Aaron being bottoms.

“Gay sex was more fun when straight people were more uncomfortable with it,” Bobby says.

The new trailer comes a few weeks after Eichner chatted with GAY TIMES about being “worried at the beginning” of the film’s creative process.

“I didn’t know what the story of the movie would be, then it was one of those crazy things – and maybe you get this as a writer – where all of a sudden, you’re obligated to write something so you sit down, stare at the blank page. Turns out, I had so much to say!” he says.

“I realised that we are just so hungry as LGBTQ+ people, as gay men, to see accurate, multi-dimensional and genuinely funny and genuinely smart depictions of ourselves that we don’t get.”

Bros will be released in the US on 30 September and in the UK on 28 October.