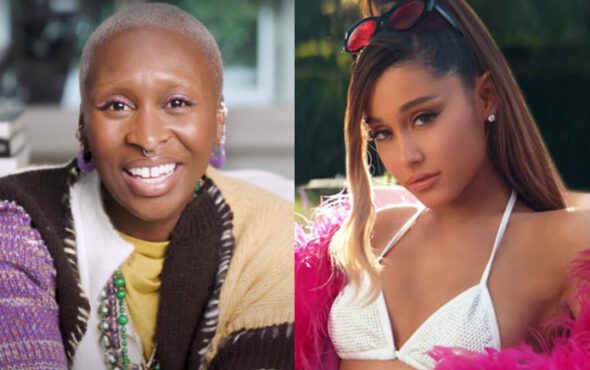 Grab your ruby slippers and get ready to defy gravity because a Wicked film adaptation is officially on the way.

After years of being in development, the highly-anticipated project has finally found its Elphaba and Glinda in Cynthia Erivo and Ariana Grande, respectively.

“These two witches! The emotional moment I got to tell [Cynthia Erivo] and [Ariana Grande] that they were our Elphaba and Galinda in the Wicked movie for Universal,” he wrote. ”Wait until you see what they bring! It is other worldly. Ahhhhh!”

Alongside his caption were screenshots of the two singers visibly emotional as they received the monumental news.

The two stars also expressed their excitement on social media and even shared the gifts they received from each other.

Taking to Instagram, Grande uploaded a photo of a bouquet of pink and green flowers that contained an encouraging note from Erivo.

“Congratulations Miss A, the part was made for you. I look forward to sharing this musical journey with you,” wrote Erivo.

The Dangerous Woman artist sent a similar note to the Tony winner as well, writing: “Dear Cynthia, honored doesn’t even begin to cover it. I cannot wait to hug you. See you in Oz.”

Since the news was announced, fans of the two stars have expressed their anticipation for the film’s arrival.

The casting news also caught the attention of the show’s original stars Idina Menzel and Kristin Chenoweth, who played the parts of Elphaba and Glinda, respectively.

On Twitter, Menzel wrote: “Congrats to two amazing women. May it change your lives for the better forever and ever as it has for us. So much love.”

Chenoweth echoed similar sentiments and said that Grande was “destined” for the role of the infamous good witch.

“I’m not sure if I’ve ever been this proud. From the very first day I met you, you were destined for this role,” she wrote.

“Congratulations [Ariana]! The best Glinda you will be with Cynthia by your side. I love you.”

Wicked is set to follow the same plot as its Broadway predecessor, with Elphaba and Glinda becoming unlikely friends during their time studying witchcraft at Shiz University.