Ramario Chevoy on being black and sexually fluid in modern Britain 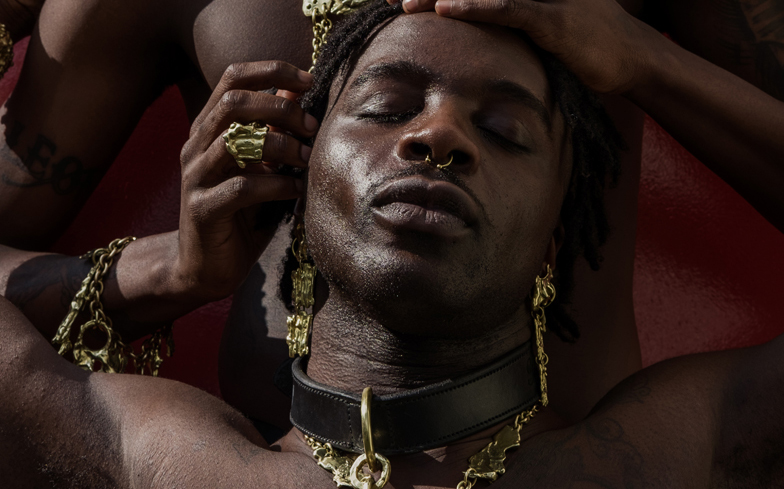 Shot by Imani Clovis with close friend Karl Benjamin modelling alongside him, Ramario talks to us about his experiences coming to terms with his sexual fluidity.

How would you describe your sexual identity?
When it comes to my sexuality, I don’t like labels as I feel like they automatically box you in and I’m not about that. I see beauty in everything and everyone whether that be a man or a woman. I’m more attracted to a person’s energy over their physical appearance.

At what point did you understand that sexuality could be more fluid than what society presents?
To be honest, I would say when I hit my 25th birthday that’s when I understood that my sexuality was fluid the most. I think that’s because that’s when I would say my style was fully solidified . With my style being so eclectic, it helped me to fully express myself which in turn attracted people of both sexes. In that, I guess I was able to explore my attraction to them too. Up until that point I had been quite indifferent to it but now I’m fully aware that I attract and can be attracted to both men and women.

How has this affected your relationship with close friends and family?
I think people thought they already knew my sexuality before I did. People are quick to assume that I’m fully gay because of the way I dress but as stated before, I don’t like labels or boxes at all. I’m confident and comfortable within myself but I’m still learning new things about myself all the time and I’m more than a label or a box. When it comes to relationships with friends and family they’ve mostly been supportive but like I said, I can’t really fully say I’m one thing or another as I’m still trying to figure that out. It’s a process, life is a process. How do you navigate being true to yourself and understanding the views held by people who share the same heritage as you?
I can only be myself. I believe that when you are yourself people respect you more. I’m well aware of my cultural heritage and the views on certain topics but at the end of the day, I  have one life & I must live it to the fullest – in whatever way I see best. I also understand that there are certain things I must do and be mindful of when i’m around certain members of family as a show of respect but I think it’s important to talk to people about things. Even if someone doesn’t understand your views and choices on your own lifestyle they should still be able to respect you and your decisions. People might not believe in equal rights & justice but there is something called human rights which everyone is entitled to no matter their race, gender or sexual orientation. Have you ever experienced racism within the LGBTQ community?
To be honest I can’t recall a time that I have.

What would you say is the biggest challenge that queer people of colour face in modern Britain?
I would have to say it’s probably the acceptance of their lifestyle choices from family members. The reason I say this is because when it comes to Caribbean culture and values it’s seen as forbidden, especially when it comes to the older generation. Our grandparents will probably never get their heads around it because of where and how they were raised but it’s okay to not understand, it’s about respecting peoples views, choices and decisions for themselves. How has coming to terms with your sexual identity influenced your personal style?
I’ve always been adventurous when it comes to my own  style but when it comes to my sexual identity, it’s really helped me to push the boundaries and shock people. Whenever I get asked to describe my personal style, the one word I use to sum it up is eclectic. I say this is because one day i could look very feminine then the next day I could look very masculine it all depends on my mood. All jewellery by Lucky Little Blighters