Henry Holland interview: ‘The older I get the more I care about LGBTQ issues’ 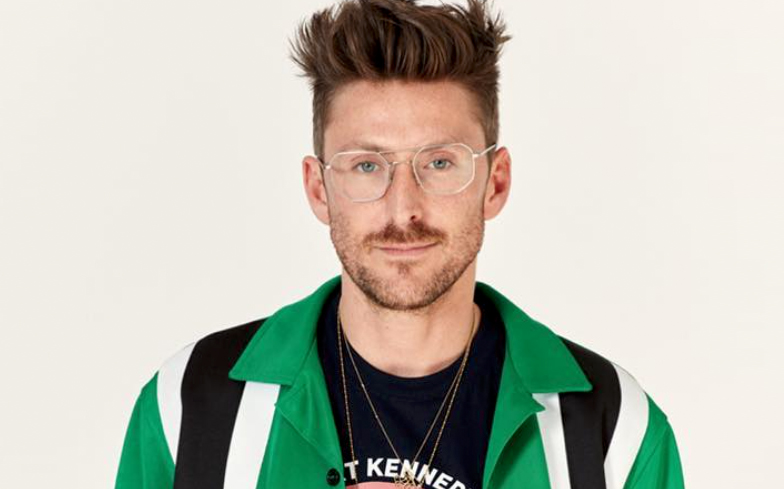 Actor Simon Callow, writer and trans activist Jake Graf, and British fashion designer Henry Holland have already given the charity a huge amount of support, and will continue to do in their new roles.

For the latter – who first launched his House of Holland fashion label 10 years ago in 2008 – it has come at a time when he feels more passionate than ever when it comes to the issues LGBTQ people still face.

In this exclusive interview – which you can read here first on Gay Times – Henry Holland reflects on his coming out experience, what he hopes to achieve by working with the Albert Kennedy Trust, and the inspiration behind his new Pride-inspired t-shirts.

Why have you chosen to become a Patron of AKT and why do you think their work is still so important today?
The older I get the more I care about certain issues and any cause linked with the LGBTQ community has a massive resonance with me. I had the most privileged outcome to my coming out and I never once had any issues surrounding that and my mum is a huge fag hag and self proclaimed gay icon so it was never an issue to me. For me that’s the normal and feel that’s what it should be for everyone and so it really shocks me and upsets me to hear that other peoples experiences are the antithesis of that. I feel that the work that AKT do to help and support those who experience rejection is so vital.

Given that you’ve said you had an easy time coming out – is there any advice that you could offer to a young person who is having a difficult time coming out?
It’s difficult to say without knowing people’s circumstances because it’s all very well and good me saying things like ‘be your true self’ which is the advice I would give, but not knowing the circumstances I’d say ensuring your own safety is important. Make sure that you’ve got a back up and a support system which is something that AKT has available. It’s important to get that support in place first if you do feel you are going to have any adverse reactions. Despite the challenges that may come it is so important to live your truth because your mental health will flourish as a result of that.

Was it surprising to you to see just how over represented LGBTQ people are in the homeless population, and just how many of them were homeless as a result of being rejected by their families?
It was really shocking. When I first heard the statistics a few years ago I was really shocked and upset by them. As I’ve said I came from the exact opposite and so the way I want to help AKT is to try and make my own experience of coming out become the normal for everybody else. Is there anybody in your social circle who had a much harder time than you coming out who maybe feared that rejection from their family that could lead to homelessness? Where does your sense of empathy come from?
I’ve got friends who have come out at various points in their life – some early on and some much later on in life and I feel that struggle with some of them has been very internal. My empathy comes from the a place of shock that there are these situations still happening in 2018 especially within the industry I work in where being gay has never been an issue. I think that the fashion industry has the highest concentration of LGBTQ people in it and so that’s why it’s accepting and never been an issue.

Do you think that sometimes it’s easy for those lucky enough to have comfortable lives as out LGBTQ people to forget how difficult life can be for some young people? Do you think it’s important for us to stay connected to those with different life experiences?
It’s really important to keep yourself educated and understand the struggles of others – especially when it comes to using the voice you have or the tools you have to help make a difference within the community. I’ve done a lot of different charity work to use my brand as a platform to support certain causes. I feel that the work that AKT does really hit home and resonated with me because I felt a real personal connection to the fact that could have been me despite being so lucky having the love and support that I have.

This year you designed t-shirts and hoodies for this years pride at AKT which will be sold to raise funds. Could you tell us how this came about and the inspiration behind the designs?
This is the second t-shirt I’ve worked on and designed to raise funds for AKT, and like the first time I sat down with a group of the young people as they the heart of the charity and what they are all about. It was when I spoke with the young people about their experiences and how AKT had changed some of their lives and saved some of their lives, I found it devastating and that’s the message that I wanted to get across through the t-shirts. I’m well known for writing things on t shirts that are very frivolous and silly so this time I really wanted the t shirt to speak from the heart of the young people.

For the first t-shirt we selected some keywords that reflected their experiences and to communicate that message of the important work that AKT do and what it meant to them. For the second t-shirt we started off by coming up with words that started from letters from the word pride. Eventually the group realised the messaging was more important than the visual, so we moved it on and worked with some really key words such as ‘community’, ‘freedom’ and ‘protection’. These are key messages that the young people feel that pride is all about and how it makes them feel.

Is there anything else you are particularly looking forward to in your role as Patron?
I am really excited to keep talking to people about the charity and the amazing work that they are doing. I’m so excited for AKT at the moment because it feels like they are being approached and are getting involved in so many things as well as gaining more recognition for the work that they do. I am really excited to help them promote that.

To find out more about the great work The Albert Kennedy Trust does, or to support their hard work, you can visit their official website here.