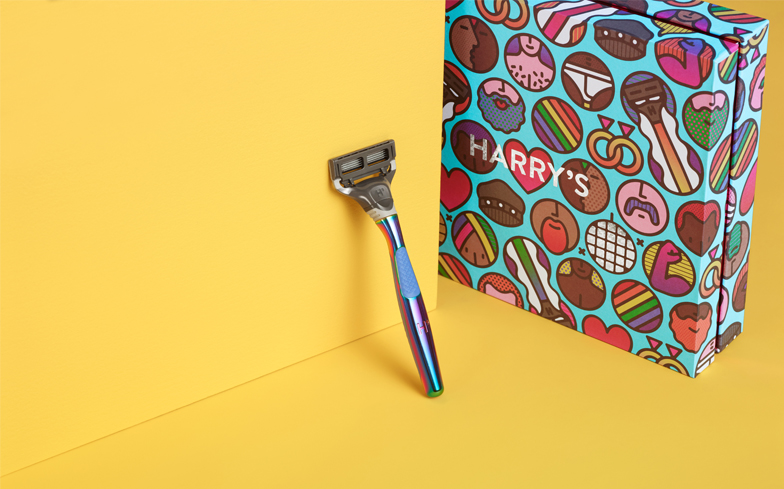 With Pride season well and truly upon us, it’s time to start thinking of those looks for all the parade marching (and partying) you’re going to be doing.

For the men, part of that preparation will involve getting that facial hair in check – if that’s smoothly shaven or just sharpening up those edges.

This June, grooming brand Harry’s will launch their Shave with Pride campaign, which “calls on individuals of all walks of life to be active allies to the LGBTQ community.”

Part of this campaign will see well-known members of the community ditch out-dated labels and come up with their own unique self-determined identifiers.

Elsewhere, This Morning’s resident doctor, Ranj Singh, has identified himself as a ‘Super Nerdy Gaysian and Proud’. To highlight Harry’s commitment to celebrating individuality, they will launch a limited-edition Shave with Pride Set (priced at £24), which features a unique ‘rainbow’ Winston razor handle.

It will be packaged in a gloriously colourful box designed by graphic design duo Craig & Karl.

The unique colour printing process means that no single two rainbow patterns on the handles will be the same, ensuring customers are guaranteed a genuine one-off.

What’s even better about this limited edition set is that 100% of the UK profits will be donated to LGBTQ charities selected by the campaign’s famous faces.

“Harry’s has a proud history of working with organisations that help challenge out-dated stereotypes and who aim to shift attitudes and behaviours that devalue marginalised groups,” said Jeff Raider, co-founder of Harry’s.

“Our support for Pride is a natural extension of that. As a company we embrace individuality and celebrate diversity, so we’re extremely proud to be an LGBTQ+ ally.”

The Shave with Pride campaign will officially launch on 18 June, and Harry’s is a proud sponsor of Pride in London.