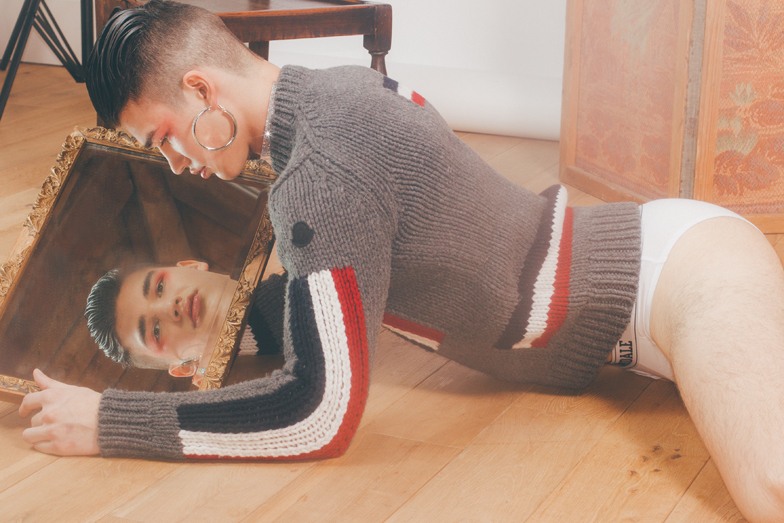 “Fashion editorial is most interesting when boundaries are pushed and you see something that you haven’t already seen done.”

At a time when there is more discourse than ever on gender, and the norms expected to come with it, there’s a more conscious effort to break entrenched thinking that led to those notions.

With that in mind, we took some time out to speak to photographer, Harrison France and stylist, Kyle Lawson to discuss their aesthetic and their latest editorial for Gay Times.

The styling in this shoot seems to blend masculine and feminine energies quite well – how important is it to you to blur gender lines?
Harrison: I think fashion has definitely helped society become more accepting with blurring gender lines, therefore I find it important to carry on the celebration of this in my own work. I think over the last couple of years, in comparison to say 10 years ago when I was studying at secondary school, it just seems normal in 2018 that we are able to blend gender lines. I know that when I was at school, being open to gay culture was frowned upon, however now it’s celebrated and I’m so glad.

I hope that the acceptance of the LGBTQ community will start a lot earlier in the youth of today’s lives, as it seems a shame that it was only university onwards that this has happened in my life. Everyone I was surrounded with at university was open to gender blurring as it was highly encouraged and celebrated within Leeds Arts University, where I recently graduated. I think this is an extremely positive attitude for everyone to have as it makes people feel comfortable with being who they truly are.

Kyle: I think especially in fashion it is always great to explore the lines of gender and be able to blend menswear and womenswear. This allows you to find something new and create depth within the layers of the work. I also would have to say that although personally I find it great when lines are blurred, I also understand the importance of each gender as a separate and this still has great importance. Was there a specific story or narrative you wanted to tell in this shoot?
Harrison: I suppose I just wanted to capture an editorial that portrayed a side of fashion I’m interested in but hadn’t had the opportunity to shoot. I love working with Kyle Lawson, and he has such a unique and genderless approach to fashion styling that I had to get on board and capture in this set. What are the inspirations behind the way this shoot is photographed?
Harrison: My visual inspiration for the shoot was photographic styles of one of my favourite photographers, Petra Collins, and also my good friend Naomi Blakeborough. I called upon Naomi for advice on creating the star lens filter that I used to create the hazy visual effect that you can see within the images. This was something new for me and I was able to add my own stamp on the editorial with clear influences from my favourite photographers that work in this style. The model direction wasn’t overly feminine in terms of poses, we aimed to keep things very gender neutral. However, it is clear the editorial is portraying a man channelling his inner femininity.

Kyle: Inspirations behind the way the shoot was photographed came from the visual aesthetic of Petra Collins’ fashion photography work – in particular her recent Frank Ocean cover shoot for 032c magazine. Harrison and I discussed and made mood boards prior to the shoot in order to achieve the vintage, ‘hazy’ aesthetic that we produced.

What are the inspirations behind the way this shoot is styled?
Harrison: Before a shoot we tend to brainstorm ideas in order to build a plan for the shoot. I remember discussing the styling would be influenced by fashion across all spectrums, from male street style to Hollywood glamour. This being said, myself and Kyle are very alike in the sense our inspiration comes from everything we see as creatives in our daily lives, mostly through social media and the internet. The styling was about being playful and spontaneous, and the looks definitely came together as the shoot took place. Fashion has to be flexible.

Kyle: With all honesty, the inspirations for the shoot were very random and eclectic. My vision for the shoot had no specific inspiration and I think this is what always excited me. I just wanted to vibe with the styling of the shoot and develop an understanding of what did and didn’t work when pieced together.

What was the biggest challenge in trying to bring these vastly different styles together?
Harrison: I suppose it’s not really a challenge but more of being accepting and non-conforming to combining fashion that you wouldn’t usually see paired in your classic fashion editorial or worn by your everyday guy. For example, pairing a corset with a vintage ice hockey jersey. Some things don’t always work together but experimenting can lead to creating an outfit you never could’ve imaged working without trying it.

Fashion editorial is most interesting when boundaries are pushed and you see something that you haven’t already seen done. I’m glad Kyle was daring with the fashion combinations he tried out because the editorial tells such a great fashion story of gender deconstruction and flamboyancy in male fashion.

Kyle: The biggest challenge for myself as a stylist was to always maintain an understanding of my limits. To recognize when I was expressing what I wanted to say and when I was going to overboard and past the point. Which sometimes is very easy to do. Your model resembles the typical sporty popular guy at school and yet here he is seen expressing what the mainstream would consider a “less manly” style and attitude. Was he chosen for this reason?
Harrison: I feel using boys with an effeminate appearance dressed in feminine clothes is a bit too obvious, as androgyny is something we have seen extensively photographed a lot lately. I think using a typically masculine male in this kind of shoot adds a lot more questions and innovation to the overall story. It makes the viewer ask questions: Is it cool for a manly guy to wear more ‘typically feminine’ clothes now? Does that work?

He was definitely chosen to portray the ‘non-conforming to gender’ vibe we were going for.

Kyle: I guess for me, the styling of the shoot would have always been perceived as what the mainstream would consider to be ‘less manly’, regardless of the aesthetic of the male model. I do for sure believe that the sporty aesthetic of Daniil helps to emphasize the differences between the two styles. Daniil wears: sweater by Moncler at Harvey Nichols; briefs by Lonsdale; earring and choker by Topshop

How did you work with the model to achieve your vision?
Harrison: Daniil was comfortable wearing anything we chose for him and was very natural in terms of posing in a slightly feminine way that not every guy would be comfortable with. I suppose the attitude Daniil had towards the shoot just shows that more manly guys in todays’ society are comfortable with gender fluidity. I think a few years ago, if we would have asked a heterosexual male model to dress and pose in this way, he may not have been as accepting, but I suppose this depends on the person and the attitude they have.

I think it’s important that Daniil didn’t feel shy or worried of how he would be seen, knowing these images were intended for submitting to a magazine. He was aware of the exposure and I think this is a bold and brave move that he was willing to help us create this vision. I am glad that embracing gender fluidity is finally being favoured, explored and embraced rather than rejected and frowned upon.

Kyle: Daniil was a great model to work with. He had an incredible enthusiasm to explore our ideas towards the roles we wanted him to portray. As a team you have to have an open attitude to ideas and possibilities. This will forever allow you to extend your creative potential and outcome. How much of yourselves did you put into this shoot?
Harrison: I suppose there is a lot of my personality within the shoot. Over the last few years at University I was immersed and surrounded with so much LGBTQ culture and learnt to love everyone for who they are so I would say my viewpoint on gender fluidity is strongly illustrated within this fashion story.

Kyle: I would say that as a creative I always try to put as much of myself within the work as possible. By doing this, you appreciate and believe in the work! Stylistically, the shoot has an incredible resemblance of how I approach my personal style.

Kyle: I do believe that men have become a lot more open towards gender and the approach of fashion and sexuality. I also appreciate the fact that men and women are different creatures. Without the differences, we wouldn’t be able to question and explore the ideas of gender fluidity. I am very excited to see the development and explorations of gender fluidity within the future.