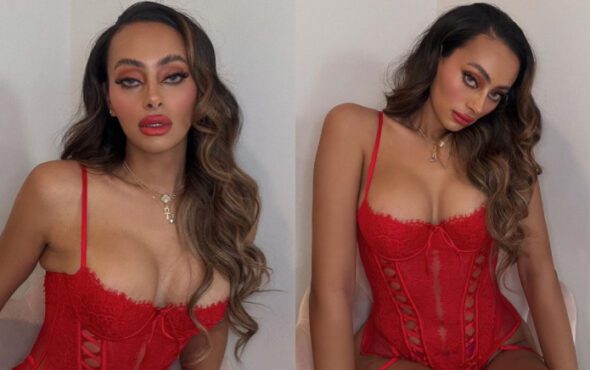 TikTok star Emira D’Spain has made LGBTQ+ history as the first Black transgender model to collaborate with Victoria’s Secret.

The 25-year-old, who’s known as xoxoemira on social media, partnered up with the clothing company for her video “Single Girls Guide to the Perfect Valentine’s Day.”

At the start of the video, D’Spain gets ready for her love-filled day by walking fans through her pampering routine.

“First skincare and then make up… of course you have to curl your hair to look like an absolute baddie,” she explained.

During the outfit portion of the post, the social media talent paired a red Victoria’s Secret corset with a black mini skirt, a moto jacket and suede Louboutins.

The rest of the self-love video consisted of her going on a solo brunch in New York City, buying flowers, taking home a new pair of diamonds and enjoying a spa night.

“Valentine’s Day may be about love, but it also includes loving yourself,” she concluded.

Shortly after uploading the collaboration, D’Spain took to Instagram to reflect on the historic partnership.

She also gave a shoutout to Brazillian model Valentina Sampaio, who became the first trans woman to work with the company in 2019.

“Valentina Sampaio paved the way and it’s such an honour to continue that legacy on the first day of black history month.”

In an interview with USA Today, D’Spain said that she hopes her video will continue to open doors for other trans people.

“My entire platform is built on confidence and self-love,” she explained. “I want to empower young trans women and men around the world to show them that the beauty and fashion industries are changing, especially if you are a POC.

“I am so grateful to work with Victoria’s Secret and hope this paves the way for those after me.”

The inclusion of D’Spain comes a few years after the brand’s problematic past regarding LGBTQ+ inclusion within the company.

In 2018, Victoria’s Secret chief marketing officer, Ed Razek, made transphobic and fatphobic comments during his in-depth interview with Vogue.

In the piece, he referred to the transgender community as “transexuals” and said they weren’t included in the annual show because the “show is a fantasy”.

After the immediate backlash, Razek took to social media and apologised for his harmful comments.

“But it was never about gender. I admire and respect their journey to embrace who they really are.”