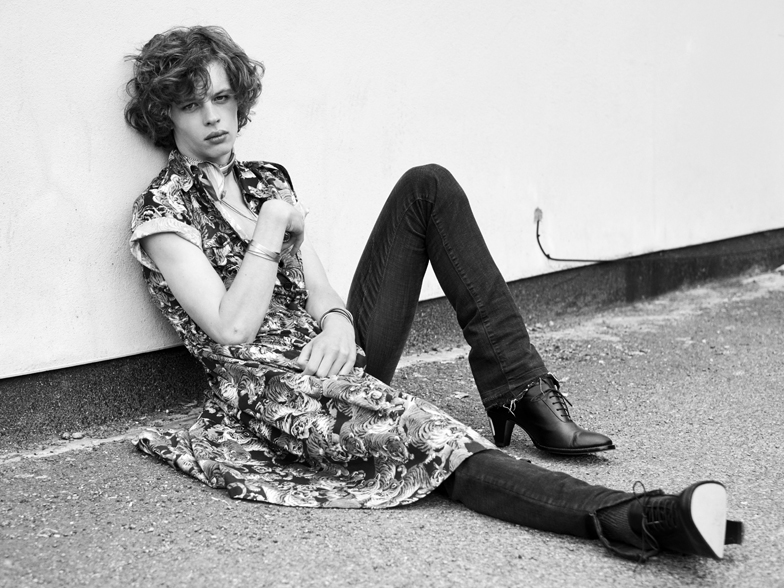 We live in an age where men’s and women’s fashion is becoming a thing of the past.

With more unisex collections being created, we thought we would sit down and speak to Daniel Bush, the founder of Cross Sword – a shoe brand that’s shunning gender norms completely. Why did you start the brand?
I started Cross Sword because I saw an opportunity to make a small difference. Commercially available shoes have been largely available for women and for men but not a mix of the two. Current shoes that are available for men with a heel are still largely thought of as a taboo subject and largely targeted at the drag market, and as a result high heels for men are not available in every high street shop. I wanted to shake up the norm. There is a big movement in how people are viewing gender as well as a more liberal acceptance of homosexuality certainly in the UK, although there is still a long way to go. By making a shoe that is a blend between what already exists in the shadows so-to-say, and what is mainstream, we want to address this movement. Cross Sword is a brand that has been designed to disrupt common perceptions of gender association with fashion. We want to lie in-between traditional male and female fashion.

Did you study design?
I studied design at Goldsmiths College University of London as a Degree and Masters student. During my Masters I really started to focus on footwear and in particular conceptual footwear. The course was called Design Critical Practice, which is a blend of design and philosophy, and that really forced me to think about footwear in a completely different way.

Where did you grow up?
I am a North London boy; I grew up being surrounded by the hustle and bustle of a major city. As a teenager I often travelled into the centre of London. I loved having so much readily at-hand and being in a city that was at the cutting edge of fashion and culture. Is there meaning behind the name Cross Sword?
When we started looking into the concept of creating men’s footwear with a heel I started to research men’s heels. I naturally came across King Louis 14th. During this period men’s heels were more common than women’s. Men used to wear heels to keep their foot in the stirrup of their horse. This got me thinking about other things associated with that time. The concept of a sword came to mind but I thought of the sword as an aggressive symbol. This was not something that I necessarily wanted to be associated with the brand but I liked the idea that a sword pointed downwards was also a way of suggesting trust and peace and acceptance of the other, especially when another man had his sword pointing in the same direction.

Where do you look for design inspiration?
I love the idea of blending two opposing entities; The initial range of Cross Sword footwear is a juxtaposition of men’s classic styling and sexy heels. Some ideas come when I think of two things that would not normally blend and I blend them! Inspiration also comes from looking at materials and existing styles and seeing what can be done to personalise them.

What celebrity would you most like to see in your shoes?
That’s a hard question to answer because it depends on the type of shoe that I would choose in our range. In our current range we have three different types of shoe. I would say Noel Fielding because I can imagine him in one of our suede more casual styles. He would look great with his style of fashion and the edgy look that he has.

I think Tom Daley would look really good in a black suit and one of our patent pairs of shoes. I think the shoe would really compliment his figure. Lastly, I also think our brogue shoe would look great on Chiwetel Ejiofor in a typically English tweed suit. Will you be expanding the range to include different types of heel and shoe styles?
Up until now, our main focus has been producing a high heel shoe for men that not only looks great but is super comfortable. We have spent our time developing a high heel that you don’t have to take off after a night out on the walk home. After the initial launch of Cross Sword we want to get straight onto developing the next styles and importantly the next types of heels. We want to offer a much taller heels as well as a slightly smaller heel. We have received a lot of feedback on the current range and one of the requests was to produce a heel that was taller than 6cms. We want to start with a taller heel first and then once that is established make a mid range heel. As for styles, we have so many ideas that we want to try out, derbys, monks etc. We also want to branch out into boots and maybe even a sandal!

What are your goals for the brand this year?
Our main goal for this year is not to sell as many shoes as possible, but rather to start the journey to make wearing heels more socially acceptable. We want to change public perception one step at a time, if you’ll excuse the pun. For us, being disruptors through design is just as important. We feel this will indirectly help build our brand give Cross Sword a status as being edgy, daring and innovative.

Why do you think we haven’t seen men’s heels like this before?
We have seen men’s heels like this before, but it was way back when King Louis the fourteenth was in power! The reason we haven’t seen them recently is because the risk of bringing a product like this to market is too large. What people define as socially acceptable in terms of fashion does not currently include heels for men. The concept is incredibly simple but too difficult for people to grasp. It could also be that the majority of designers are so used to the way things are that they don’t want to try to change things. What is it that you find empowering about heels?
Wearing heels changes a number of things about the wearer. We only have to look at the affect they have when women wear them to answer that question. Heels make you look and feel taller and therefore raise your confidence, they change the way you walk making it a lot sexier. Heels have been associated with the term sexy in so many different ways. If it works so well for women why can’t it be the same for men? It is a common opinion that when you ask a woman why they wear heels they will tell you it makes them feel different; it makes them feel like they are being noticed.