Why Burberry’s unashamedly gay collection made me cry 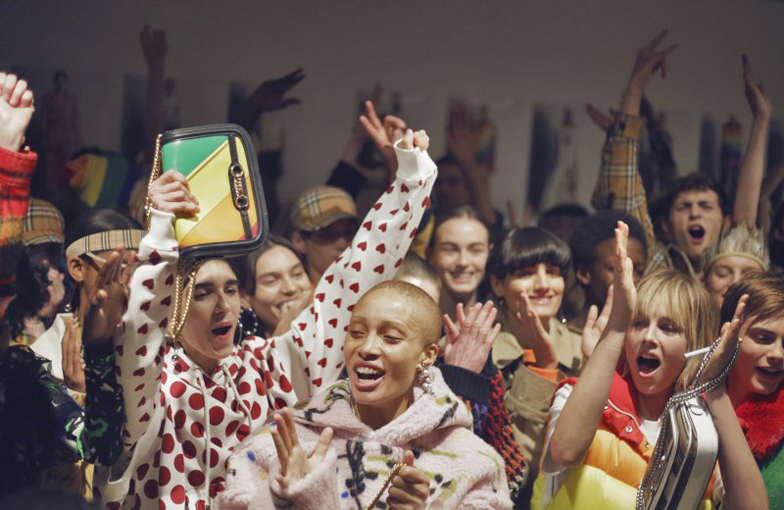 “How funny,” I thought to myself as I walked out of White City Station, “I feel like I’m in secondary school again”.

This area was one in which I spent a lot of time during those formative years. An area that I’d visit begrudgingly as I tried to fit in – play it like one of the guys in my year, heading to fights with other schools and changing the way I speak to be one of them. At the same time though, that area was one I’d escape to. When the after-school fights had cleared and I didn’t want to go home, I’d be in a dance class not too far from the station.

We walked into the building in which the show was being held and it began to dawn on me just how important this show was. Christopher Bailey, the man who had been at the helm of Burberry for 17 years, revitalised the brand and, by bringing shows back to London Fashion Week in 2009, put the British capital back on the map as a serious fashion contender was leaving Burberry. Here I was, at his final show for the brand, witnessing the end of an era, and in that, seeing it dedicated to the LGBTQ community. At first I thought it was a nice gesture. A pride flag motif on a few bits and then business as usual. I thought there would be some kind of show-stopping PR stunt – maybe Christopher Bailey would come out at the end with other gay men who have had major success in the industry or have been icons and role models to the community. As the show began and went on, I realised there was none of that. There weren’t any stunts to make it fantastic. The show was fantastic for a whole other reason. It was fantastic because it made you feel.

Seeing the same Burberry caps that the boys who would give me a hard time for being myself would wear, come out with the Pride flag running down them was a moment I won’t forget. All of a sudden I was 13 again but this time I wasn’t afraid to say who I was to anyone. Not my family, not my classmates, and, most importantly, not myself. The music, along with the styling took me on a journey that I hadn’t thought about in too much detail. We’ve all gone through phases in our personal style. Trying new things out to find ourselves and somehow feel comfortable in the skin that, for a while, we didn’t want to be in because that would mean admitting to ourselves that we are different.

I saw this in the styling. I saw the simplicity and straight-forward nature of the first few looks grow. What would have been just a coat, sweater and trousers became a long sheer top, worn over a sweater with colourful leggings and huge polka dot sneakers. As this development happened, the music moved from soft, melancholic and somewhat apologetic to powerful, demanding and totally unapologetic. This was growing up and realising it was okay to be myself. It was moving from feeling unable to wear certain things around some family members for fear of being shamed; moving from fearing of making too many gestures with my hands because it might give me away, to using those same gestures to dance in a club and be acknowledged and appreciated by my friends and strangers both in and out of the community.

The looks were made up of beautiful pieces thrown together and though mismatched, it was all perfect. We have all been that mismatched look. We’ve all been the plain coat and the embellished mesh top and the colourful leggings and the polka dot sneakers. At one time or another, we’ve all felt it wasn’t okay to be all of these things at once – compartmentalising our lives to the point that when we were totally alone, we didn’t know who to be. I certainly was that person. This show was liberation in action.It was the process of growth, realisation and acceptance of ourselves that we come to at a point in our lives as people in the LGBTQ community. This really was a show dedicated to those in the community. No longer are we the rainbow flag partially hidden under a large hoodie. We had become the bold rainbow cape strutting down the runway and having fun whilst doing it! I couldn’t help but smile and cry as lazers formed a rainbow arch for the models to walk under at the finale. You couldn’t help but feel overwhelmed as Don’t Leave Me This Way blared through the speaker system and models danced as they came down the runway. There was a wave of energy that was almost palpable when Christopher Bailey came out and took a bow under that rainbow arch to a standing ovation. It was made even more unforgettable because this man, who had done so much for Burberry, one of the most iconic brands in the world, chose to give his final moment with the brand as his platform to the LGBTQ community. He chose to empower and acknowledge the community in the most honest and unassuming way. He chose to tell those who buy from the brand that the community is here and strong and will continue to fight for equality. He chose to tell the community to remain proud of who they are, what they have gone through and wear their pride unashamedly. Most importantly, he told the kids who feel different, weird and unable to be themselves that they can be themselves because they are loved and accepted and part of a family that extends further than their home, school, town, city or country. They’re part of a community that will stand together, stand up for one another and accept one another.