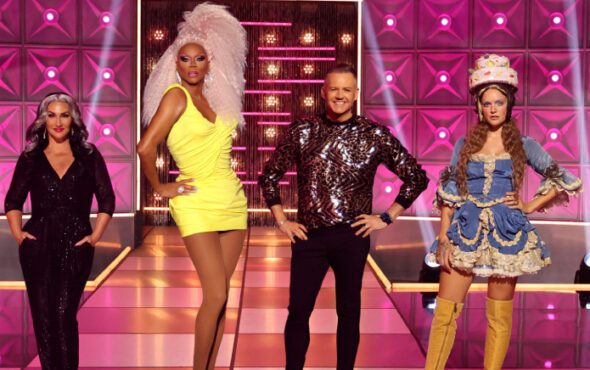 The queens travelled back to the Y2K era during this week’s episode of Drag Race All Stars 7.

Last week, the queens delivered commencement speeches for ‘draguates’ around the world. As the blocked queen, Monét was bestowed with the power to determine the running order, choosing herself first and her new frenemy The Vivienne in last place.

After the queens delivered hilarious speeches, the winners sashayed down the main stage in the category, “Veiled It.”

Ru then declared Jinkx and Raja the top two of the week, providing the former with her third challenge win and second star and the latter with her first star.

The two winners were also awarded an additional star to give away to one of their fellow queens.

The season three and five alumni then lip-synced to Better in Color by Lizzo, with Jinkx triumphing and choosing to block The Vivienne.

The next day, the girls entered the workroom prepped and ready for their sixth maxi-challenge.

However, before the queens could dive into their new challenge, Raja and Jinkx revealed which queens they were going to give a Legendary Legend Star to.

In the end, Jaida Essence Hall and Yvie Oddly were awarded the aforementioned accolade, providing the latter with her first star.

For their sixth maxi-challenge, the queens were tasked with forming two Y2K girl groups for a flashback episode of MTV’s iconic countdown show Total Ru-quest Live!

After Mama Ru left the workroom, the queens dived into the two new songs to prepare for their upcoming performances.

However, things got a little awkward after The Vivienne called out Raja, Jaida, Yvie and Monét X Change for forming a group before asking for input from the other queens.

This resulted in Jinkx labelling two of the workroom couches as Titanic and 2gether 4ever so the queens could choose which song they wanted to do.

In the end, The Vivienne, Yvie, Jinkx, and Jaida ended up forming The Other Girls – which left Monet, Shea Couleé, Raja, Trinity The Tuck, and Raja creating M.S.T.R.

After recording their respective songs and creating their intricate choreography, The Other Girls and M.S.T.R headed to their first-ever Total Ru-quest Live! appearance with Carson Gayly.

While both groups delivered hilarious and gag-worthy performances, Monét, Trinity, Shea, The Vivienne and Yvie were singled out for praise.

After the winners sashayed down the main stage in the category, “Night Of A Thousand Dolly Partons”, Ru declared The Vivienne and Yvie the top two of the week, providing the latter with her second star of the episode.

The two winners then lip-synced to Why’d You Come in Here Looking Like That by Dolly Parton, with The Vivienne triumphing and choosing to block Jinkx from receiving a star next week.

On next week’s episode, the queens will create a signature legendary legend look inspired by one of Ru’s classic ensembles.

Check out the best reactions from the latest episode of All Stars 7 below.

Yvie went from having no stars to being the front runner in ONE EPISODE #DragRace #AllStars7 pic.twitter.com/P0kpCyiEaU

raja probably spent more time preparing her outfit and makeup than memorizing her own verse bc she ate up this look #allstars7 #dragrace pic.twitter.com/s6ccSipXPR

This is one of the funniest things in recorded history #DragRace #AllStars7 pic.twitter.com/BqdYxvMieq

i genuinely cannot believe these pictures are real. #allstars7 pic.twitter.com/3SssiWndNF

Jinkx getting Next week’s a
blocked design challenge#AllStars7 #DragRace pic.twitter.com/3V83TjGNBZ

can we please talk about how gorgeous monet looked in the challenge? #AllStars7 #DragRace pic.twitter.com/Dt5kaQ0xI2

the vivienne is the first ever queen to beat yvie oddly in a lip-sync! #allstars7 pic.twitter.com/rrZn6KPy2Q

jinkx and the vivienne passing round the platinum plunger #AllStars7 pic.twitter.com/eKO1qin0h9

so we can all agree MSTR fucking DEVOURED?? #dragrace #allstars7 pic.twitter.com/XuMZ8skIVM

You cannot tell me that Monet X Change did not kill this runway. No, I will not be taking any questions.#DragRace #AllStars7 pic.twitter.com/RXLzsVAGAg

Catch RuPaul’s Drag Race: All Stars Series 7 every Friday on the streamer of all things drag, WOW Presents Plus. Subscribe via http://uk.wowpresentsplus.com/