Prepare to be Frock Destroyed… officially!

The Frock Destroyers have announced plans to release their debut album FROCK4LIFE and have unveiled brand new single, Her Majesty.

Their first single Break Up Bye Bye – which they recorded during their time on the BBC Three competition – peaked at No.3 on iTunes and entered the Big UK Top 40 at No.10, making herstory by becoming the highest-charting hit on the chart by a drag group.

But that was only to be the start of their blossoming pop career.

FROCK4LIFE features nine tracks in total (as well as a bonus remix) and will be released on 11 December.

“Oh my god I’m so excited about our new album, Frock4Life, I just can’t believe it,” said Baga Chipz. “We’ve worked so hard and we’ve spent nearly a year on it all in lockdown and it’s FINALLY HAPPENING. It’s going to be amazing; we love all the songs and I think especially coming closer to Christmas time, we all need a bit of cheer and want to put smiles on people’s faces.

“The fans have been so amazing so I think now is the right time to FROCK DESTROY and we’re going to take over the world! We want to thank you for all the support. Big fat Baga kiss.”

Blu Hydrangea added: “Break Up Bye Bye and Frock Destroyers was like catching lightning in a bottle and showed the world what British drag is capable of. We want to build on that iconic moment and take over the music industry as the slaggy drag-band that we are!

“Baga, Davina and myself were handed a golden opportunity to frock destroy everyone with new music and you better believe this album will leave everyone despunked and begging for more!” 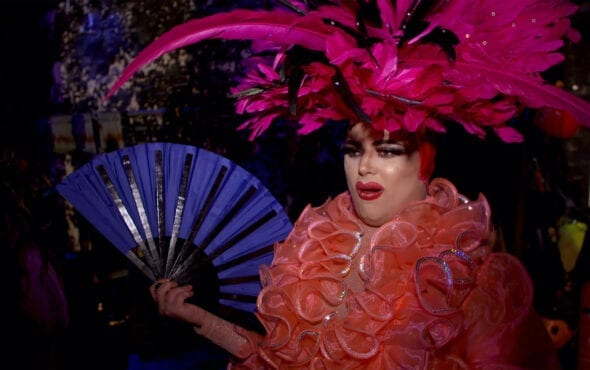 “I’m so excited about the album, it’s a bit of a Steps going to dinner with Little Mix hosted by three drag queens,” said Divina de Campo. “There are proper bangers with some tongue in cheek foolishness and great vocals. I cannot wait for everyone to hear it.”

The collection is produced by World Of Wonder Records and distributed by The Orchard.

American singer-songwriter Leland (Brett McLaughlin) is the main songwriter on the album, as well as Executive Producer.

“The combination of Leland and The Frock Destroyers is a match made in heaven,” said Fenton Bailey and Randy Barbato. “If pop music were crack cocaine this is it, with ear worms so addictive they ought to be illegal. We are so proud to be releasing TFD’s debut album on World of Wonder Records.”