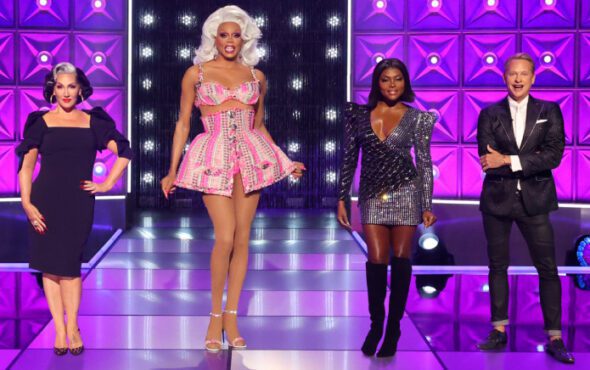 We’re smack dabbed in the middle of the 14th season of RuPaul’s Drag Race and it’s getting even messier and gag-worthy.

Last week, fans were shocked when Kornbread “The Snack” Jete announced her departure after suffering an ankle injury.

Later in the episode, the queens were tasked with creating PSA’s for Drag Race legends Tempest DuJour, Jaymes Mansfield and Kahmora Hall.

After the judges’ deliberation, Jorgeous and Orion Story were placed in the bottom two. In the end, Orion was sent home after losing the lip-sync and receiving a plain chocolate bar.

With the latest elimination completed, the queens entered the workroom to read Orion’s goodbye mirror message.

Jorgeous, who shined during the Ava Max lip-sync, opened up to the queens about her experience being in the bottom.

“Being in the bottom two is not the f***king tea at all. I’m so pissed at myself,” she said.

Kerri Colby offered some encouraging words, stating: “Use that as fuel baby.”

The girls then headed to the couches to relax and praise Bosco’s maxi-challenge win.

In a confessional, the Seattle-based queen opened up about her achievement, stating: “I got the momentum I needed. Getting the win on the board is like that first Dominio and now you can really get the ball rolling.”

The queens also congratulated Lady Camden for landing in the top three.

“For them to look at us and say those amazing things, it was like ‘Am I dreaming?'” she explained.

The conversation got messy after Deja Skye brought up Daya Betty’s “disappointed” feelings for being safe.

In response to Daya’s prickly statement, Deja threatened to “beat her ass” if she “yelled” at her again.

The next day, the queens entered the workroom refreshed and ready to compete.

It didn’t take long for Mama Ru to appear with a tragic story involving Michelle Visage.

“At this point in the competition, I feel that we are close enough that I can confide in you. It’s about Michelle Visage,” Ru revealed.

She then went on to say that the beloved judge had been compulsively shopping in the evening’s while on “glambien.”

“For this week’s maxi-challenge, you need to create unforgettable looks using only the unconventional materials found in these GlamzonPrime packages,” Ru explained.

While rummaging through their boxes, Willow Pill struggled to open her own selections due to her cystinosis condition.

“I’m like having trouble opening the boxes because my fingers are f***ing me up,” she said in a confessional.

Instead of opening her boxes, Willow created her outfit from the other queens’ discarded materials.

“I feel like a little sewer rat, scavenging amongst the trash and I’m starting to panic a little bit,” she said.

Daya seemed to be in her element, stating: “I’m excited because when I usually make stuff, I make stuff like this. I go to thrift stores and get a bunch of table cloths.”

While discussing their ideas for the challenge, Willow and Daya revealed that they were both doing baby looks.

The latter wasted no time letting Willow know that she already had her idea in place.

On the other side of the workroom, Jasmine Kennedie immersed herself in her GlamzonPrime items with hopes of securing a “streamline look.”

While getting her materials together, Angeria Van Michaels asked the New York-based queen if she was “aiming to win” the sewing challenge, to which Jasmine responded: “In the back of my mind, I would love to. But if I don’t, I ain’t gonna be bitter. No tears left to cry in this one, mama.”

On the other hand, Maddy Morphosis was visibly stressed due to her previous performance in the last sewing challenge.

“I’m feeling a little bit triggered at this point because I know that I’m not the best seamstress and I know I don’t have, like the best eye for design,” she said.

The queens were then surprised by Mama Ru and Carson Kressley – who entered the workroom to give fashion advice.

After giving Kerri, Jasmine, Jorgeous, Willow and Maddy encouraging words, Daya entered the hot seat to ask the judges what they were looking for.

In response, Ru and Carson suggested that Daya move out of Crystal Methyd’s shadow.

“I think the big thing is, obviously you’re from the House of Methyd and there’s a lot of similarities between you and beloved Crystal Methyd,” Carson explained.

“We need to find out who you are and what is the special sauce that you bring to the competition.”

After receiving their critiques, the queens got back to work on their unique outfits.

While everyone seemed to be in somewhat good spirits, Daya felt conflicted about being compared to Crystal.

“I always get compared to Crystal nonstop. It’s like I love her, but it’s so annoying,” she said.

Elsewhere, Jorgeous hit a snag with her carpet themed outfit, which kept getting caught in her sewing machine.

“As I’m wearing it, it just looks like a f***ing potato sack. It’s just pulling in the wrong places,” she explained.

The next day, the contestants entered the workroom to glam up for their forthcoming runway debut.

During their makeup session, Kerri asked Jasmine and Angeria, who’s currently struggling in the challenge.

The latter pointed out Willow’s outfit and said she “hadn’t seen a lot” of her baby ensemble.

Things got emotional when Kerri opened up her tough upbringing with her father.

“My dad did not like me growing up. Like at all,” she revealed. “He would tell me to leave the room if I walked in and he was around.

“And he would be like, ‘You disgust me. You being around me is disgusting because I don’t like your feminine energy.'”

She went on to say that her dad’s dismissive attitude helped her realize that she didn’t want to be part of her own family.

Jasmine also opened up about her troubling coming out experience and revealed that her dad’s friend outed her.

“I had an Instagram with my drag stuff – my mom knew – we were just hiding it from him. Everyone knew,” she said.

She explained that while her dad accepted her sexuality, he demanded that she end her emerging drag career.

“My dad kind of had the preconceived notion of what gay life is and he didn’t really want to hear me out,” she said.

Jasmine then said that after his dad’s girlfriend opened his eyes to the art of drag, the two have been slowly repairing their relationship.

On the other side of the workroom, Maddy opened up about not seeing her mom since she was 18.

“The last time I saw my mom was for my high school graduation. She visited and after I graduated, she just left,” she explained.

She then went on to say that her grandma was like her mother and she always spent time with her. Maddy also revealed that she hasn’t told her grandmother that she does drag.

With the queens baked and ready, they headed out to the runway to show off their Glamazon Primetime looks.

Lady Camden, Angeria and Jorgeous ended up in the top three – with the latter taking home her first maxi-challenge win.

Maddy and Jasmine ended up in the bottom two and were tasked with a lip-sync to Beyoncé’s classic track Suga Mama.

After their dazzling performance, Mama Ru named Jasmine the winner and saved her from elimination.

Like in previous episodes, Maddy was given one last chance of survival by opening her chocolate bar to see if she had the golden ticket.

Unfortunately, it was just a plain ole candy bar and the Arkansas-based queen was sent home.

In next week’s episode, the queens will be bringing the drama to The Daytona Wind acting challenge. TS Madison also returns as the episode’s guest judge.

Watch new episodes of RuPaul’s Drag Race season 14 every Saturday on the streamer of all things drag, WOW Presents Plus. Click here to subscribe.