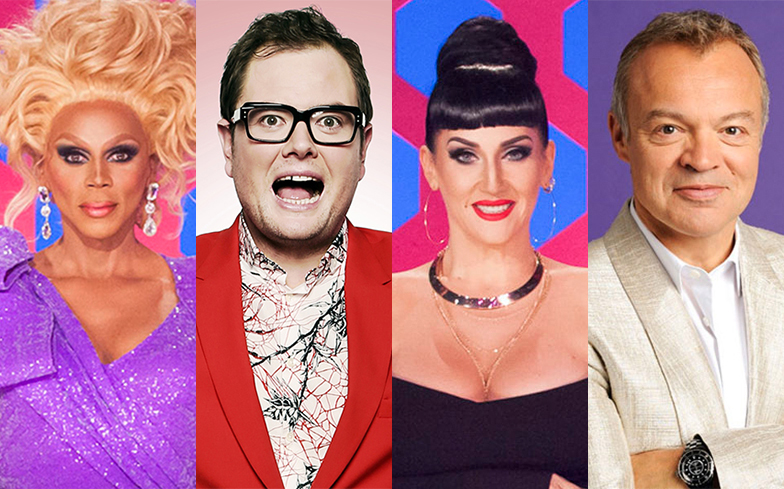 Here’s the big reveal you’ve been waiting for: BBC and World of Wonder have unveiled the first batch of guest judges for RuPaul’s Drag Race UK season two.

Back on the BBC for 10 brand new episodes starting 14 January, Drag Race UK will be inviting some of Britain’s most beloved stars to the judging panel alongside RuPaul, Michelle Visage, Graham Norton, and Alan Carr.

The BBC confirmed these first batch of names on social media, with more announcements expected in the coming weeks ahead of the premiere episode.

You didn’t think we were done, did you?

Outside of this official announcement, we know Dawn French is expected to appear in the second season too.

During an episode of Jessie Ware’s podcast Table Manners, the actress revealed: “They did originally ask me to be a full-time judge, but I couldn’t, I don’t live in London.

“But I am going to be a guest judge in a couple of weeks.”

And according to tabloid reports, Gemma will judge the most sickening game of all – Snatch Game.

“Everyone is thrilled Gemma agreed to be part of the new series. She is a dream signing. Snatch Game is all about having a laugh, so Gemma is perfect for it,” they said.

With the UK version starting on 14 January, it means there will be an overlap with Drag Race seasons for the first time. World of Wonder recently announced that the 13th instalment of the US original will premiere New Year’s Day.

Unlike its widely acclaimed predecessor, which saw The Vivienne triumph over Baga Chipz and Divina De Campo as the UK’s First Drag Superstar, season two will introduce 12 queens to British audiences.

Santa called and said you can have one present early.

The first episode of #DragRaceUK series two lands on @bbciplayer on January 14th at 7PM. pic.twitter.com/yWr5G5zvmt